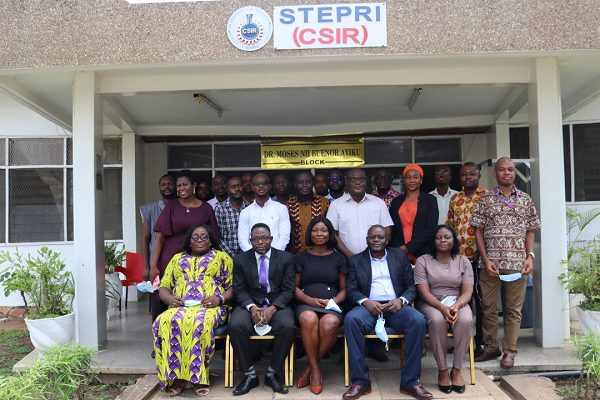 To help address water-energy-food (WEF) security, African cities have been urged to shift from silos approach to nexus approach.

Making the call in a welcome address, the Director of the Council for Scientific and Industrial Research (CSIR)-Water Research Institute (WRI), Professor Mike Y. Osei-Atweneboana, explained that a nexus thinking will enhance water, energy and food security.

Such an approach, he said, can help a city like Accra become more sustainable and resilient.

Prof Osei-Atweneboana was speaking at the opening of a 3-day Participatory Scenario Development workshop organised by the CSIR-Water Research Institute in Accra on Tuesday, July 6, 2021.

The workshop was organised as part of the implementation of the “Enhancing Sustainability and Resilience of African Cities through a Water-Energy-Food Nexus Approach” (EnsureWEF).

The project is a collaborative research between CSIR-Water Research Institute and research partners from Ghana, Uganda and Kenya, with its overarching objective of enhancing the sustainability and resilience of African cities through an integrated and participatory knowledge generation, application and governance through a WEF nexus approach.


The workshop also aimed to co-develop scenarios with stakeholders in the water, energy, and food sectors including government ministries and agencies, non-governmental organisations (NGOs), Community Based Organisations (CBOs) and stakeholders from the private sector.

The above, according to the organisers, will inform decision-making, planning and governance of water, energy and food resources for more inclusive, resilient and sustainable cities.

According to Prof Osei-Atweneboana, Ghana as a country must strive to achieve universal access to water, energy and food.

However, he bemoaned that the current access was skewed against the poor or the vulnerable, noting that the “Covid-19 pandemic has uncovered and heightened inequitable access to water, energy and food in our cities.”

“Global and regional drivers such as climate change will further exacerbate the situation,” he warned.

Dr Emmanuel Obuobie, the Project Supervisor, who is also the Head of the Surface Water Division of the CSIR Water Research Institute, added that adoption of a nexus approach is now the current trend, even though it is not well established in developing countries, it comes with a lot of benefits particularly in the infrastructure development sectors, that is in the WEF environment in order to get the optimum benefit that comes with the integration.

He, however, said the initial implementation of the nexus approach could be challenging, "as we have been running in silos for a long time”.

In the overview of the project by the Principal Investigator, Dr Deborah Darko, a Research Scientist of the CSIR Water Research Institute, she mentioned that the EnsureWEF project is one of the several projects supported by the Leading Integrated Research for Agenda 2030 in Africa program and funded by the Swedish International Development Corporation Agency.

The project is run by the International Science Council in partnership with Network of African Science Academy. “As indicated earlier, the project is being implemented in two cities in Africa, Accra (Ghana) and Kampala (Uganda) which are among the world’s fastest-growing cities 2.93% & 4.03% respectively”. The project is led by CSIR Water Research Institute in partnership with a number of researchers from the various organization’s in Ghana,(Land Use and Spatial Planning Authority, Elite Consult), (Kampala Capital City Authority, Uganda), (Texas A&M Agrilife Research, College Station, United States of America), (Environmental Sustainability and Poverty Alleviation Group (ESPAG), University of Nairobi, Multimedia University of Kenya, Kenya).

Dr. Darko, reiterated that the “Water, Energy and Food (WEF) are important ecosystem services”. She lamented that the increase in global population and the number of people living in cities has put a lot of pressure on WEF resources in cities globally.

She cited that “the project is a transdisciplinary research and it embraces collaboration with stakeholders across the WEF sectors to co-produce knowledge, capacity and capability”. Numerous outputs of the project so far are but not limited to the stakeholder and WEF infrastructure maps and engagement plan, a co-designed research methodology developed, and synergies and trade-offs between competing WEF uses analysed.

Speaking on the issue of policy, legislative and institutional factors that influence access to utilization and governance of WEF-nexus in the city of Accra, Dr. Martin Oulu mentioned that the idea behind EnsureWEF is to encourage an integrated approach to the management of water, energy and food resources. He underscored that the significance of WEF in a nation cannot be discounted. He, therefore, stressed the need for the government ensure that more Ghanaians have easy access to WEF.

Dr. Benedict Arkhurst and Mr Bright Kofi Addai, spoke on the sources, distribution, quantity and determinants of access to WEF resources in the city of Accra. They stated that water, energy and food play crucial roles in the growing of a nation.

In a presentation on the impacts of climate change on WEF, Dr Fati Aziz said “climate change in Ghana is projected to affect its vital water resources, energy supplies, crop production and food security”. She further added that more needs to be done to seriously address climate change in the country.