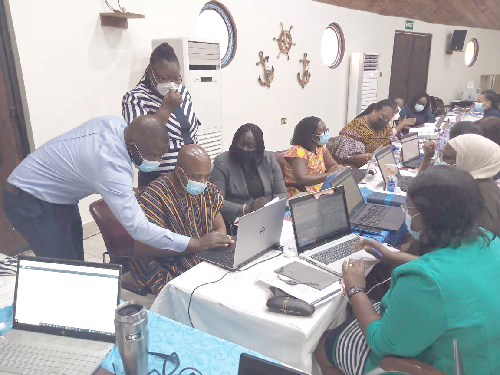 • Some of the Attorneys and Heads of Division /Units at the A-G Department engaged in a hands-on practice of the system at the training workshop.

The Attorney-General and Minister of Justice, Mr Godfred Yeboah Dame, has urged attorneys and staff at the ministry to be up-to-date with technology so as to bring speed and productivity in the administration of justice.

He said the ministry could not afford to be left behind in an era where the world had embraced technology, hence the need to be abreast of technology that would bring about efficiency in the delivery of justice through the newly introduced Integrated Information Management System (IIMS) by the ministry.

Mr Dame was speaking at the opening session of a two-day IIMS End-to-End Training workshop for attorneys and staff of the A-G's department across the country held at Ada yesterday.

The IIMS End-to-End Training seeks to address some identified challenges encountered by the Attorney-General’s Department and Ministry of Justice such as limitations to the manual filing system currently in use at the various registries.

The manual system, according to the ministry, made the retrieval of files very difficult and led to occasional loss of files and data, poor record keeping, indexing and the absence of a database of in-house cases which had rendered the A-G's office deficient in many ways.

The new IIMS is, therefore, to provide an opportunity to the A-G's office to improve its service delivery through automation and modernisation of its current work processes.

Mr Dame described the challenges encountered with the data sharing and information management at the A-G’s Department as legendary, adding that most of the time, the ministry had been made an object of ridicule as a result of files getting lost and the failure to trace vital information, some of which dated back decades.

The Attorney-General said the new system was a great step towards modernisation to address the challenges that hampered justice delivery and improved good governance as a whole.

Mr Dame said the benefits of the new system were significant as it would result in an improved management of data through the use of advance technology of efficient management of the filing system.

He pledged his ministry's commitment to support the attorneys with resources such as a well stocked e-library facility and other resources to enhance justice delivery.

"We do not intend to stick to the ways of doing things in the past and I hope that we will be able to fully accomplish the purpose of the case management system by the Office of the Attorney-General and Ministry of Justice," Mr Dame said.

The Solicitor-General of the Ministry, Mrs Helen Akpene Awo Ziwu, said the e-Transform Project was a joint collaboration between the government represented by the Ministry of Communication and Digitalisation and the World Bank.

She said as part of the deliverables to the project, the consultant, EOH/Tenth Generation Technology System, supplied some information and communication technology (ICT) equipment, including desktops, laptops and scanners, to the A-G's Office as well as the operating software, SAP and Opentest.

Mrs Ziwu added that following an orientation session, each Head of Division /Unit, namely the Civil Division, Legislative Drafters, Prosecution Division as well as Attorneys from the regions, were nominated to serve as Super Users and Change Agents for the project.

She urged the participants, especially the attorneys, to embrace and adapt to the new wave of change and enhance the service delivery of the A-G’s Department.

The Consulting Project Manager, Mr Bismarck Dzahene-Quarshie, expressed the hope that the system, when fully implemented, would lead to a paperless work flow and solve the challenges of missing documents and other bottlenecks that hampered justice delivery in the country.