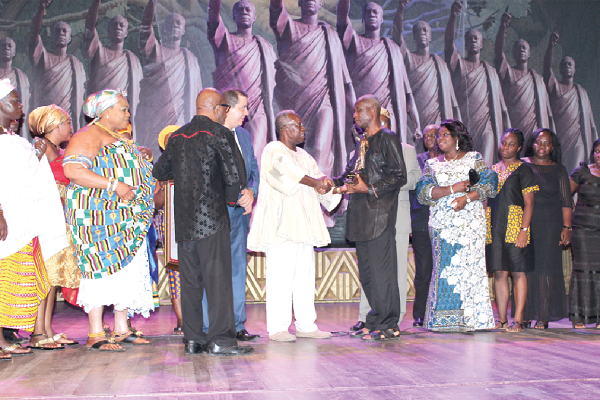 The personalities, who have distinguished themselves in their respective fields of endeavours, each received a citation and a wooden carving of Dr Kwame Nkrumah.

They included Professor Akua Kuenyehia, the country’s first female professor of law. She was pronounced the African Genius 2017 in the leadership category and Dr Thomas Owusu Mensah, who received the African Genius Award in Science/Technology and Innovation, is a world renowned inventor with 14 patents in fibre optics.

Professor Ablade Glover, described as the grandfather of contemporary Ghanaian art, was adjudged the African Genius 2017 in the Visual Arts category, while Koo Nimo (Dr Daniel Amponsah), a renowned pioneer in traditional music, won the award in the Performance Arts category. Professor Opanyin Kofi Agyekum was honoured in the Language category for distinguishing himself as an internationally recognised Akan scholar.

Others were Professor Oheneba Boachie-Adjei, a global achiever for the treatment of spine deformity and the owner of FOCOS Orthopedics Hospital in Accra, received the award in the Medicine category; Professor Kwame Gyekye, a renowned philosopher, picked the African Genius award in the Philosophy category, while 21-year-old South Africa-based engineering student, Elijah Djan, was adjudged the African Genius 2017 Young Icon for inventing bricks from recycled paper.

Dr Raphael Armattoe, credited with being one of the few world scientists in the 1940s, received one of the posthumous awards and the second went to Professor Francis Kofi Ampenyin Allotey, who passed on after he was nominated for the Lifetime Achievement category.

The event was attended by schoolchildren to celebrate the geniuses of Africa who were making waves not just in Ghana and Africa, but in the world at large.

Nkrumah as a genius

Speaker after speaker eulogised Osagyefo Dr Nkrumah as a visionary and a Pan-Africanist, who laid his life for not just Ghana, but Africa.

The Minister of Environment, Science, Technology and Innovation, Professor Kwabena Frimpong-Boateng, said he was one of the beneficiaries of what Nkrumah had done to humanity.

He said the ideas of Dr Nkrumah, when he became President, were still as relevant today as they were 60 years ago.

For his part, the Deputy African Union (AU) Chairperson, Ambassador Thomas Kwesi Quartey, who quoted extensively from the works of Dr Nkrumah, said the legacies of Nkrumah could not be erased.

He recalled that while in Achimota School as a 15-year-old boy how Dr Nkrumah’s books were burnt when he was overthrown, but explained that the fact that Dr Nkrumah ideas were still relevant today as they were in the 1960s testified to the fact that, “you can burn the books, but you cannot destroy the ideas.”

Ambassador Quartey described Dr Nkrumah as a freedom fighter, a strategist of genius against classical colonialism and a visionary leader, who sought to unit Africa.

The Grand Patron of the African Genius Award, Omanhen of Essikado Traditional Area, Nana Kobina Nketsia V, said the awardees had gone beyond excellence, whose geniuses had built institutions of learning and pioneered inventions in the sciences and the arts throughout the world.

The Board Chairman of the African Genius Award, Mr Kojo Yankah, said the awardees would inspire the youth and serve as role models.

Speaking to schoolchildren who attended the function, Dr Mensah encouraged the children to be proud of themselves as Ghanaians and that they were capable of doing whatever their counterparts anywhere in the world could do.