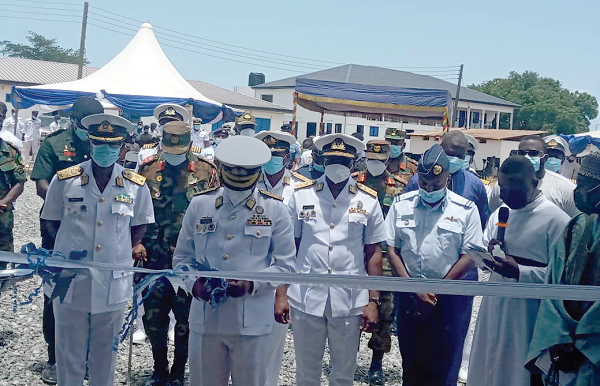 ABOVE: Vice Admiral Seth Amoama (middle), the Chief of the Defence Staff, being assisted by Commodore Samuel Walker (left), Flag Officer Commanding the Western Naval Command, to inaugurate the quarters (below)
30.5k Shares

The Chief of the Defence Staff, Vice Admiral Seth Amoama, has inaugurated a fully furnished 72-bed Sailors’ Transit Quarters at the Western Naval Command in Takoradi.

The project was designed to temporally cater for the accommodation needs of both senior and junior ratings drafted to the Western Naval Command.

At the ceremony, Vice Admiral Amoama assured personnel of the Ghana Armed Forces that a conscious effort was being made to address accommodation shortfalls within the system.

He said the government’s Barracks Regeneration Project was one of the initiatives to address the housing challenge for personnel, stressing that the initiative would improve the accommodation situation for military personnel and tackle the much-needed infrastructural challenge faced by the armed forces.

“Accommodation for personnel in the Armed Forces has for sometime now remained a serious challenge. Most military barracks have not seen any serious infrastructural development since their construction in the 1970s and 1980s,” he said.

Vice Admiral Amoama said there were efforts to correct the current disproportion between the number of personnel and available accommodation, adding: “It is a major challenge which successive governments have tried their best to resolve”.

He said “several new accommodation projects have been started across all garrisons with the aim of improving the situation for personnel”.

The Ghana Navy, he said, had had its fair share of the accommodation projects with the completion of the 368-bed Biekro Barracks accommodation in the Eastern Naval Command.

Vice Admiral Amoama urged personnel who would use the new accommodation facility to take good care of the building and its facilities to ensure that they were preserved for posterity.

The Flag Officer Commanding the Western Naval Command, Commodore Samuel Walker, said the new accommodation facility had come at the right time to relieve the navy from the ratings’ temporal stay at the command.

Commodore Walker, who is also the Garrison Commander, said the Sailors Transit Quarters would absorb the recurrent relocation challenges faced by ratings before they were eventually allocated a permanent place during their service within the command.

The Western Naval Command, he said, was grateful to the Chief of Defence Staff for initiating the Sailors Transit Quarters project when he was the Chief of Navy Staff.