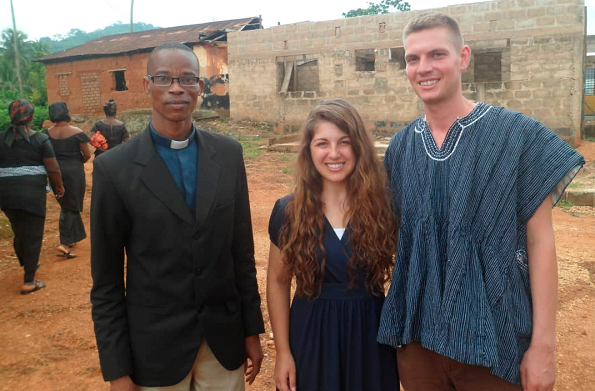 Beneficiary communities of the United States Peace Corps' global volunteerism in the Volta and Oti regions have lauded the US government for its continued support for especially rural communities in Ghana through the programme.

The commendation came on the occasion of the Peace Corps' Diamond Jubilee.

Ghana became the first country in the world to receive Peace Corps Volunteers in 1961 and the programme has for over 50 years of uninterrupted collaboration made significant impact in communities in all regions of the country.

Most of the young individuals posted to various communities in the regions have left an indelible mark in a gamut of areas of development, including education, health, community economic development, agriculture, the environment and youth development.

The Volta Region has had its fair share of Peace Corps who have made significant impact in these areas which are still evident.

With a goal of fostering peace and understanding, the mostly young trained Americans posted to the Volta Region for their two-year stints, have found a way to relate with their host communities beyond just service, by adopting the ways and culture of the people such as adopting local names, to speaking their dialect, so as to better blend in with them.

One such Peace Corp, Ms Bretaen Rovb, for two years made a significant impact in the Bodada community of the Jasikan District by offering impactful service to the Evangelical Presbyterian JHS, where she taught and formed various reading and girls' clubs.

She was also instrumental in the renovation of the school, restocking its library and has been a keen champion of menstrual hygiene for girls and environmental sanitation. In a further deepened commitment to health, Ms Rovb linked up with health workers to distribute mosquito nets, organised health outreach, and successfully sensitised the Bodada community to malaria.

A Minister at the Bodada E.P. Church and local Manager of EP schools at the time, Reverend Willington Klutse, who described Ms Rovb as a "hardworking lady" said her outreach provided reading spectacles to community members in need which had helped especially worshippers to improve their scriptural reading.

Rev. Klutse said Ms Rovb’s entry into the community in 2014, brought about several changes which can be witnessed today.

He indicated that the reading culture among students had improved while littering of the environment had decreased, among others.

This impact and several others elevated Ms Rovb to be installed as a development queen of the community with the adopted name of Nana Adjoa I.

Nana Adjoa's impact, according to Rev. Klutse, was worthy of emulation and spoke to the spirit of Christmas. He called for an increment in the number of volunteers sent to the communities.

He, however, called on Ghanaians not to extort from them in the exchange for goods and services since it was demoralising.

In the South Tongu District of the Volta Region, Hikpo also became a beneficiary of the programme when Ms Clara Aubry was posted to the community in 2018.

With an adoptive name, Adzo Sena, Ms Aubry, a member of the peace corps who was trained in the area of health also had an impactful two-year stint at Hikpo and even reapplied for another two years of volunteerism in the area before the COVID-19 pandemic set in.

Ms Aubry made nutrition for nursing mothers one of her several project areas by introducing the sack farming method of food production for especially nursing mothers who could not afford to buy from the market and so could not provide nutritious meals for their children.

She also facilitated the acquisition of 40 household toilets for the community in order to lessen the impact of open defecation.

Through Ms Aubry’s effort, about 14 beneficiaries produced and sold honey for sustenance. This followed a bee keeping training she organised for these community members. She regularly stayed in touch with the community despite having ended her time of volunteerism there.

A former assemblyman of the area, Mr Shine Amenohu, described Ms Aubry’s impact as "great" and called for more volunteers to be sent to the community to speed up its development.

He advised Ghanaians to learn from the volunteers and cultivate the spirit of patriotism and honesty.

The goals of Peace Corps Ghana are to promote sustainable development and to build mutual cultural understanding on the part of Americans and Ghanaians.