37 Military Hospital runs out of blood 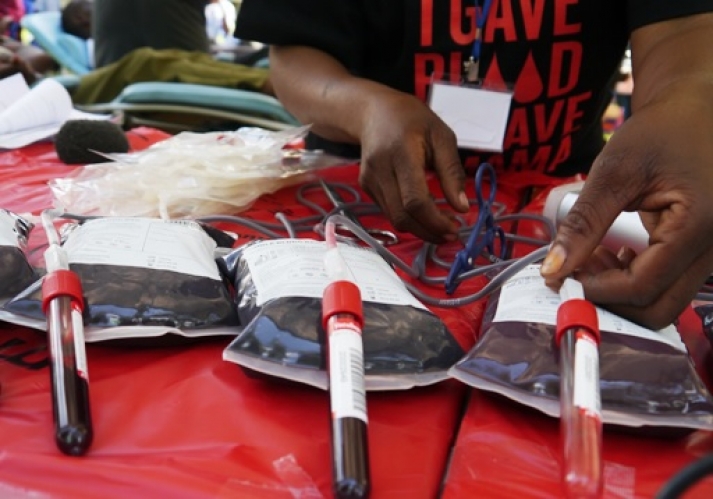 The recent gas explosion near the Trade Fair Centre at La in Accra, which resulted in the death of 11 people and injury to more than 40 others, has caused shortage of blood at the 37 Military Hospital.

Making a passionate appeal through the Daily Graphic in an interview in Accra yesterday, Major Pabi called on “individuals, religious organisations and institutions to voluntarily assist the hospital in the donation of blood to beef up its reserve”.

He expressed the hope that the hospital’s plea would be heard.

The Blood Bank of the 37 Military Hospital has capacity to store 600 units of blood at a time. In the wake of the gas explosion, the hospital used about 150 units of blood on the victims who were rushed to the facility for treatment.

According to Major Pabi, the hospital would need 200 units of blood to shore up the stock.

“We cannot wait for the blood bank to deplete before making the appeal. We are, therefore, appealing to the public to assist us before we face an acute shortage which can result in the loss of lives,” he said.

Asked how the victims on admission at the hospital were faring, Major Pabi said they were responding to treatment, adding that some of them had been discharged.

On Thursday, December 22, 2016, nine people initially died in a gas explosion that occurred near the Ghana International Trade Fair Centre at La. The number of casualties eventually rose to 11.

About 40 others who sustained various degrees of injury were rushed to the Korle Bu Teaching, the 37 Military and the La General hospitals.

Eyewitnesses said the explosion occurred around 5.30 p.m. and swept through the street onto parts of the Trade Fair Centre.

Some of the injured were workers waiting for buses on a road that links the area to Tseaddo, Spintex and Teshie Tsui Bleoo.

In a related development, the Ghana Chamber of Bulk Oil Distributors (CBOD), on December 26, 2016, donated GH¢11,000 to 22 of the victims of the La gas explosion at the 37 Military Hospital.

Each of the victims received a cash donation of GH¢500.

The Chief Executive Officer (CEO) of the CBOD, Mr Senyo Hosi, made the donation on behalf of the chamber.

He charged the government to, for once, crack the whip to forestall deaths caused by negligence at public places.

He said there were laws but it was unfortunate that people got away with negligence, irrespective of how grievous the outcome of their negligence was.