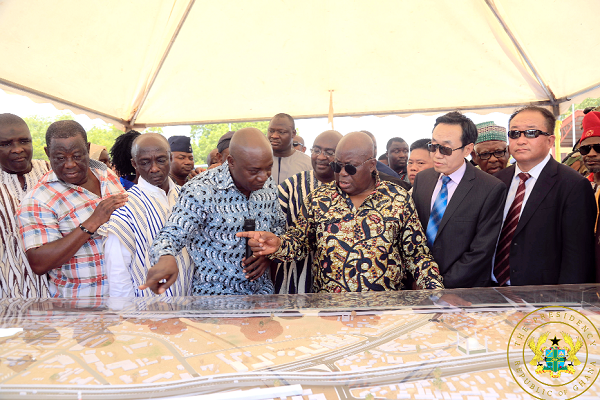 President Akufo-Addo being briefed by a Director at the Ministry of Roads and Highways on the Tamale Interchange
30.5k Shares

While many events that took place in the Northern, North East and Savannah regions would be considered significant given the diverse nature of the three regions, once together as one, it was the sad events, such as the killing of a 90-year-old woman and the incessant cases of armed robbery, that dominated the headlines.

And who will forget the floodings that displaced hundreds of people and also destroyed farmlands that robbed farmers of their livelihoods that occurred in the three regions?

Despite these unfortunate incidents, some events such as the cutting of sod for works to begin on the Tamale project, a significant move to solve the perennial water challenges in the region, cannot be overlooked.

The year 2020 in the Northern Region began with a demonstration against the compilation of a new voters register by the Electoral Commission (EC) on January 12, in the Tamale Metropolis.

Dubbed "Tikusagi" to wit "we won't agree" in Dagbani, the nationwide protest that began in Tamale, the Northern regional capital by the Inter-Party resistance group did not stop the EC from compiling a new register that was used for the December 7,  2020 presidential and parliamentary elections.

Another topical issue that came up during the year under review was the saga of the ‘cannot be found’ 400 tricycles on the premises of the Northern Development Authority (NDA) office in Tamale in the latter part of January and early February, 2020.

According to findings on the investigation that were submitted to the Police Administration, the tricycles were not forcefully taken or stolen from the NDA yard and that the top echelon of the NDA management had sufficient knowledge of the people they issued the tricycles to.

Also, the report indicated that due process was followed by those who went for the tricycles as the 10 containers carrying the 400 tricycles were issued with waybills and inspected by the NDA security before they left the yard.

The police recommended that the management of NDA should be held responsible for the ‘missing’ 400 tricycles.

The region was not insulated from the outbreak of the coronavirus (COVID-19) infection as it recorded its first cases on March 24, 2020 which involved 10 West African nationals who arrived in Tamale who tested positive for the virus.

They were eight Guinean ladies, a Burkinabe couple, who visited the dialysis unit of the Tamale Teaching Hospital (TTH) for treatment.

The 10 West African nationals who tested positive were quarantined at a hotel in Tamale but one out of the eight Guinean ladies managed to escape from quarantine and she was never found, at least, there was no official information to that effect.

The issue of the Guinean lady who escaped from quarantine became a topical issue in the region and the country as a whole in the wake of the COVID-19 pandemic in the country.

The government, in the surge of the pandemic established a COVID-19 testing centre using the Public Health Reference Laboratory at the TTH as the testing site for the five regions of the north (Northern, Upper East, Upper West, Savannah and North East).

The COVID-19 testing centre has the capacity to test over 200 samples a day, thereby reducing the time and cost of transportation of samples to the Kumasi Centre for Collaborative Research (KCCR) in Kumasi for testing.

The project seeks to expand the supply capacity of the Tamale Metropolitan area and also improve upon the flexibility of water supply system which will rely on the White Volta at Yapei, with a 29.7 million per day capacity water treatment plant.

President Akufo-Addo also cut the sod for the construction of the $30million Yendi water supply project.

The Yendi water supply project which is being financed by a $30 million facility from the India Exim Bank is aimed at providing the people of the Yendi Municipality and its environs with 15,000 cubic metres of water daily to meet the water demand from now till the year 2040.

Nalerigu, the North East regional capital for the year under review also benefited from a water supply project which was inaugurated by President  Akufo-Addo on July 28, 2020 to further improve access to potable water in the area.

President Akufo-Addo also, on July 30, 2020, cut the sod for construction work to begin on the $49million Damongo Water Project, the capital of the Savannah Region to improve the water situation in the area.

A number of road infrastructure was also begun in the year 2020 and notable among them is the first interchange in Northern Ghana in Tamale after President Akufo-Addo cut the sod for construction work to begin on the project in 2019.

The region also in the year under review witnessed the snatching of a number of 4×4 luxurious vehicles, notable among them was a pickup belonging to the Savannah Regional Coordinating Council which was allegedly snatched by some armed men in Tamale after the Savannah Regional Minister, Mr Salifu Adam Braimah handed it over to a friend in Tamale for safe keeping while he travelled to Accra.

The Northern Region was also not spared the annual floods caused by continuous rainfall at the latter part of August to the first week in October coupled with the spillage of water from the Bagre Dam in neighbouring Burkina Faso that caused massive flooding in some communities along the White Volta in the Kumbungu Tolon and Saboba districts and the Savelugu Municipality.

The flood displaced about 500 residents in Nawuni in the Kumbungu districts where several people had their houses collapsed and had to put up at the local Roman Catholic Primary School in the community.

Management and Staff of the Graphic Communications Group Limited (GCGL) was one of the corporate entities that extended a hand of support to the flood victims in Nawuni with both food items and other essentials to lessen their plight.

The two newly created regions, the North East and Savannah out of the Northern Region were also hit by the flood.

In the North East Region, the floods destroyed farmlands and food crops and claimed at least 10 lives according to the Regional National Disaster Management Organisation (NADMO).

Flooding was also experienced in the North Gonja District of the Savannah Region to be specific, Daboya/ Mankarigu located along the White Volta.

One chilling incident that occurred in the Savannah Region at Kafaba, a farming/fishing community, near Salaga, the capital of the East Gonja Municipality was the murder of a 90-year-old woman who was lynched for alleged witchcraft that received nationwide condemnation.

The key suspects in the murder of Madam Mariama Akua Denteh are currently standing trial at the Tamale High Court.