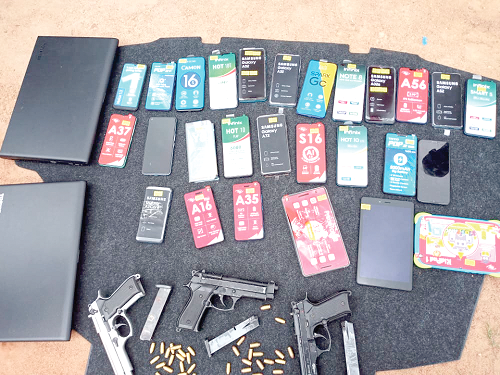 Some of the items retrieved from the suspects Follow @Graphicgh

The Rapid Deployment Force unit of the Volta Regional Police Command has arrested three men in possession of firearms and other ammunition, laptops and assorted mobile phones which were being conveyed in a vehicle suspected to be stolen.

The three suspects — Nervis Otu Laryea, 33; Ebenezer Osei, 38, and Mohammed Muntaka Mubarak, 37 — were taken into custody shortly after they were arrested on July 6, 2021, following a routine check by the patrol team stationed along the Kpando-Have motor road.

All 27 assorted mobile phones were marked with price tags, while a black and green hoody pullovers were also retrieved from the bags of the suspects.

The Volta Regional Police Commander, Deputy Commussioner of Police (DCOP) Edward Oduro Kwarteng, in a media briefing last Wednesday, said further investigations revealed that the vehicle with registration number AC 1621-18 was acquired by Nervis Otu Laryea at Afienya from an unnamed individual from Togo but without documents.

Mohammed Muntaka Mubarak, during preliminary investigations, also told the police that he obtained the assorted mobile phones without receipts at Alavanyo Wudidi from a man whom he could not name.

Ebenezer Osei, meanwhile, claimed to have visited a shrine at Alavanyo with Laryea for spiritual assistance in his business, and the two offered Mubarak a lift on their way back.

DCOP Oduro Kwarteng said it took careful and painstaking search for the three foreign pistols craftly hidden in the crevices of a false compartment in the car to be retrieved along with 40 rounds of nine-millimetre ammunition.

The suspects, who were subsequently slapped with weapons-related charges, remain in police custody after they were remanded by the Ho District Magistrate Court 1, presided over by Mr Robert Addo, on July 9, 2021.