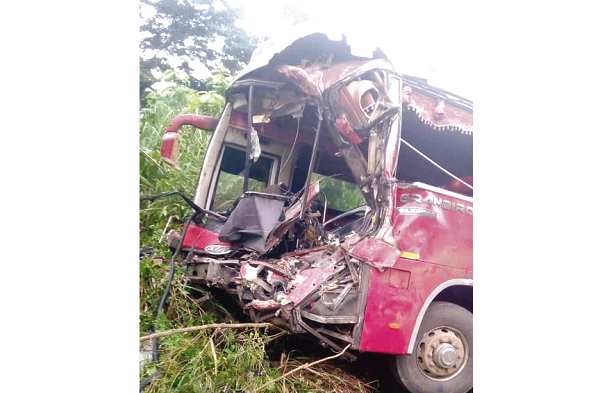 One of the Yutong buses involved in the accident Follow @Graphicgh

Three people died on the spot while 48 others sustained varying degrees of injury in an accident that occurred on the Kyebi-Bunso stretch of the Accra-Kumasi Highway in the Eastern Region last Wednesday, June 17.

The bodies have been deposited at the morgue at the Kyebi Government Hospital, while the injured are receiving treatment at the Eastern Regional Hospital in Koforidua.

The deceased comprise the driver of the bus that was travelling from Accra and two passengers including an eight-year-old.

He said one of the drivers had tried to overtake a sprinter bus approaching ahead of him from the Kumasi stretch and so he manoeuvred and veered off the road to avoid a head-on collision. Unfortunately the other driver involved in the crash did not see the oncoming vehicle in time.

He said the second driver, also, realising there was a problem, veered off the road and crashed into the back of the first bus and died instantly. The passenger who sat directly behind him was taken to hospital but also passed on shortly.

According to DSP Agyemang, the main Bunso-Apedwa stretch of the Kumasi-Accra Highway was closed to trafic on Wednesday morning following an accident on Tuesday evening involving a fuel tanker and a saloon car which had blocked the main road and had forced  the police to divert trafic through Kyebi in order to clear the previous accident scene when the accident involving the Yutong buses also happend.

He cautioned drivers to exercise extra care to avoid accidents on the road.

“We are in the rainy season and drivers are advised to be extra careful on the highways in order to avert accidents,” he stressed.