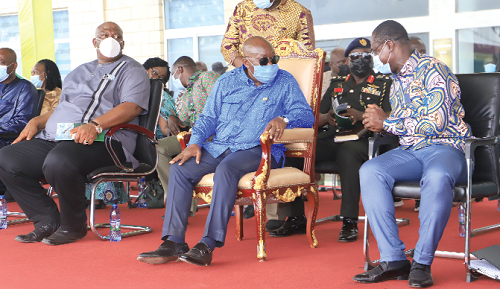 The second phase of the Accra Compost and Recycling Plant (ACARP) at Adjen Kotoku has been commissioned.

President Nana Addo Dankwa Akufo-Addo commissioned the €20-million plant financed by the Jospong Group and its partners to increase the existing facility from 600 tonnes of waste per day to 2,000 tonnes per day.

It provides metropolitan, municipal and district assemblies (MMDAs) within the Greater Accra Metropolitan Area (GAMA), a viable and cost-effective alternative to dumpsites.

It will also increase the plant’s capacity to bridge the existing gap of untreated solid waste within the GAMA.

The project includes modern teaching and learning facilities as well as ultra-modern laboratories for training and research into modern effective processing and recycling technologies.

It is the end-product from the composting process, a typical volume reductions process of organic materials and green waste (approximately 50 per cent) which undergoes the decomposition process.

ACARP organic compost can be used for all agronomical and horticultural activities.

President Akufo-Addo commissioned the project on the first day of his three-day working tour of the Greater Accra Region.

He explained that the expansion had become necessary due to the increased urbanisation in major cities.

The completion of the facility, President Akufo-Addo said, would bring immense benefits such as the effective and efficient management of the increased solid waste in an environmentally friendlier and sustainable way.

He indicated that the disposal of solid waste had remained a challenge, especially in the urban areas, creating the numerous sanitation challenges confronting the nation.

The President added that in some countries, integrated waste management had been adopted as a critical intervention in the management of municipal solid waste.

President Akufo-Addo, however, noted that the establishment of an efficient integrated waste management facility required huge financial outlay amid competing needs of other sectors of the economy on government budget.

That, he explained, made the financing of such projects difficult for the government alone to shoulder.

“It is for this reason that, on assumption of office, my government made a commitment to address this menace to transform Ghana to be one of the cleanest countries in Africa.

“In this regard, government has taken the requisite steps to create the enabling environment and framework for the private sector to partner government in finding lasting solutions to this herculean challenge,” the President said.

As a result of the huge capital requirement to establish solid waste management infrastructure, most private sector players had been reluctant to enter into this space, he revealed.

President Akufo-Addo, therefore, expressed gratitude to the Jospong Group and its partners for partnering the government to assist in addressing the sanitation situation.

President Akufo-Addo spelt out benefits from the project to include the production of organic compost for horticultural and agronomical purposes to boost agricultural production such as the Programme for Planting for Foods and Jobs.

He added that the compost plant would create job opportunities for 300 people in various capacities directly and on part-time basis.

That, he explained, was one of the key priorities of the government, adding that it would translate into an improved standard of living for the workers and their families.

President Akufo-Addo, who is the co-Chair of the Group of Eminent Advocates for the 2030 United Nations Sustainable Development Goals, said it was refreshing that the execution of the project would help realise some of the targets under SDG Six, which demanded the provision of clean water and sanitation for all.

He gave a reassurance that the government would continue to create the enabling environment for the private sector to thrive.

It would also continue to collaborate with the private sector in the provision of infrastructure to accelerate the socio-economic development of the country, President Akufo-Addo said.

The President said that his government was collaborating with the Jospong Group of Companies and its partners to implement the Integrated Recycling and Compost Plants in all 16 regions of the country, to help address the prevailing sanitation challenges.

The Executive Chairman of the Jospong Group of Companies (JGC), Mr Joseph Siaw Agyepong, disclosed that the project was made possible with the support of partners, Lubo Recycling Systems of The Netherlands.

“Additional eight pieces of equipment are being manufactured by Lubo Bollegraaf Group for the Integrated Recycling and Composting Plants (IRECOP) in Ho, Takoradi, Tamale, and Techiman, among others,” he revealed.

That, he said, would help meet the growing demand for organic compost for soil enhancement.

“It will also provide sustainable material and energy recovery solutions to the high or increasing levels of recyclables in our municipal solid waste processing, Mr Agyepong added.

He also commended his partners, Members of Parliament (MPs) in the various Parliamentary Select committees bordering on sanitation and the Environmental Service Providers Association (ESPA), among others.

“ACARP is a workable solution to the daunting waste management challenges confronting the people in the national capital.

“It is a direct response to attaining Goal Six of the Sustainable Development Goals (SDGs) which demands the provision of a clean environmental sanitation management to protect our ecosystem and promote healthy environments,” Mr Agyepong said.