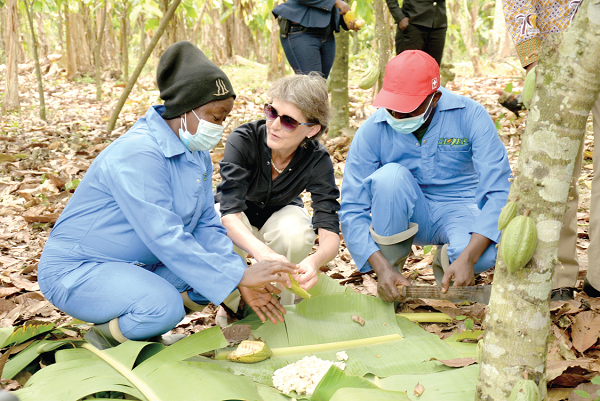 • Ms Simonetta Sommaruga, the Swiss Minister of Environment, Energy, Transport and Communication and Councillor, engages with workers on a farm.

The Ghana Cocoa Board (COCOBOD) has distributed 15 million hybrid cocoa seedlings to farmers across the country to increase yields.

About 75,870 cocoa farmers have benefited from the distribution exercise through a public private partnership arrangement involving the Cocoa and Forestry Initiative (CFI) and Sustainable Trade Initiative (IDH) last year as part of a sustainable cocoa production and farmers livelihood programme.

The Technical Director in-charge of Forestry at the Ministry of Lands and Natural Resources (MLNR), Mr Musah Abu-Juam, made this known when he addressed a delegation of Swiss diplomats, led by the Swiss Councillor for Environment, Energy, Transport and Communications, Ms Simonetta Sommaruga, and the Ambassador of Switzerland to Ghana, Mr Philipp Stalder.

The delegation visited a farm and a cocoa processing facility — Yayra Glover Limited, producers of organic products from cocoa beans, and a three-hectare cocoa farm with over 3,000 tree stocks belonging to Mr Justice Bediako and Fairafric, a chocolate producing company at Amanase in the Suhum Municipality in the Eastern Region.

He said the CFI, which was a commitment between the leading producers of cocoa beans in the world, Ghana and Cote d'Ivoire, and 35 chocolate and cocoa producing companies, had designed three programmes to improve cocoa production and preservation of the vegetation in the two countries.

They are forest protection and restoration; sustainable cocoa production, and farmers' livelihoods, and community and social inclusion.

Addressing the press after the visit, Mr Aidoo said the government had begun piloting irrigation projects to ensure an all-year round production of cocoa across the country.

He said the cocobod had also started some initiatives to process at least 50 per cent of cocoa beans locally in line with a directive by the President.

The Swiss Councillor, Ms Sommaruga, lauded Ghana for embarking on organic cocoa production which products, she said, were largely approved and demanded in Switzerland and other parts of Europe.

She entreated the government and cocoa producers to continue adhering to the campaign against climate change by promoting a "zero deforestation" programme which, she said, was one of the key initiatives the Swiss government was championing.

The programme is aimed at preserving vegetation and environment and ensuring the sustainability of the cocoa value chain. It is being implemented by the State Secretariat for Economic Affairs (SECO) of Switzerland and the Government of Ghana.