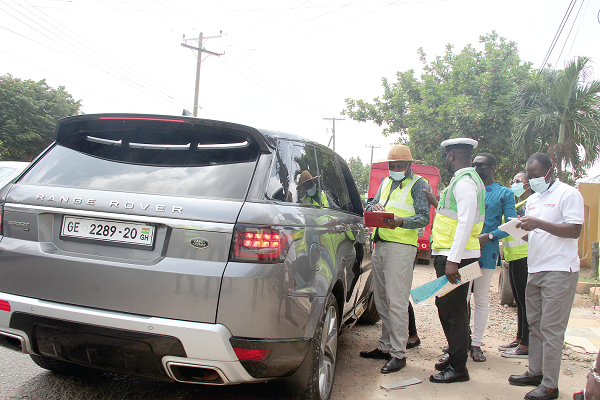 Mr Courage Verleeson Doh (left), an Enforcement Compliance Officer, DVLA, with the help of the police checking for fake number plates and expired roadworthy certificates on the Spintex Road

The Compliance and Enforcement Unit of the Driver and Vehicle Licensing Authority (DVLA) has arrested 11 motorists for various road traffic offences and other unlawful practices.

The DVLA has consequently handed over the offenders to the Motor Traffic and Transport Department (MTTD) of the Ghana Police Service for legal action to be taken against them.

The offenders, whose drivers licences have been confiscated as part of the punitive measures, have also been directed to report to the Accra Central MTTD office for further action.

These were the outcome of an enforcement exercise conducted by the DVLA in collaboration with the MTTD on the Spintex Road and East Legon yesterday.

The exercise formed part of a routine operation to clamp down the use of fake and embellished number plates, which the authority said had become widespread.

The exercise was also to educate and sensitise motorists to the road traffic law and the dangers associated with flouting the rules.

During the exercise, the Daily Graphic observed that the use of fake DV plates was prevalent among the offences that were flagged by the officers.

Although some other motorists had genuine DV number plates, they failed to emboss it on their vehicles as required by law whereas others were found to have been using the DV number plates beyond the one-year deadline.

Other motorists also abused the DP number plate, which was supposed to last for only two weeks. It emerged that some motorists had been using that type of number plate for more than two months.

Other common offences that emerged from the exercise were expired drivers licence, embellished number plates, and failure on the part of some motorists to paste their roadworthy stickers on the windscreen of their vehicle for easy identification.

In a back and forth engagement with the officers, some offenders pleaded for mercy, explaining that they had been too busy with work and that had made it difficult for them to visit the DVLA’s office to renew their licence.

For motorists who failed to produce their road worthy certificates with the excuse that they had left it at home, the team seized their drivers licences and directed them to visit the DVLA’s head office with the certificate for collection.

The team also instantly removed all embellished number plates and directed such offenders to install the original number plates that were issued to them at the point of registration.

Briefing the media after the exercise, a Compliance Officer at the DVLA, Mr Courage Verleeson Doh, said the team would follow up on all the cases it had referred to the MTTD to ensure that the offenders were prosecuted to serve as a deterrent to other motorists.

He said the DVLA was concerned about the widespread disregard for road traffic regulations, especially the use fake DV number plates, necessitating its decision to intensify the enforcement exercise to nip the canker in the bud.

“There is so much indiscipline in the system. Drivers are doing whatever they want. They don’t come to the DVLA to fix all that is required before hitting the road and it is the duty of the Compliance Division to step out and enforce the law.

“We advise the public to come to us when they need our services and desist from using shortcuts and other means that are illegal and contrary to the law,” he said.