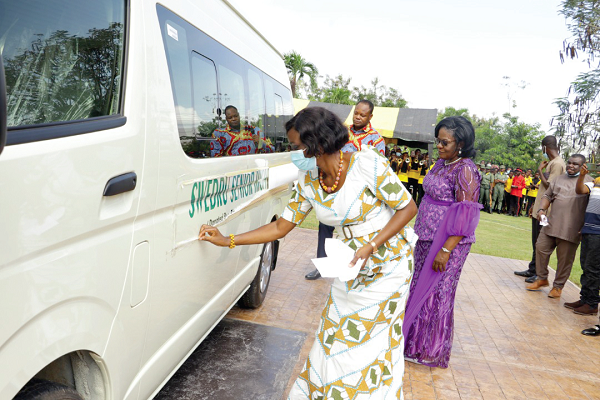 A member of the 1975 batch of Swedru Senior High School (SWESCO), Madam Esther Hanson, has donated a Toyota mini bus as part of her contribution to the development of her alma mater.

The donation, which was in response to a request by the former headmistress of the school, Mrs Alberta Obiriwa Rigg-Stewart during her tenure, was specifically presented to the school’s National Science and Maths Quiz team to enhance their mobility and preparation for the competition.

According to Madam Hanson, the gesture was to motivate the school’s quiz team to go the extra mile to win the national competition to bring honour to the school.

She noted, “this bus will motivate the school’s contestants in their preparations towards winning the coveted National Science and Maths Quiz prize after many years of failed attempts”, and further urged management of the school to ensure that the bus was regularly maintained for it to last”.

The presentation of the bus was done during a send-off ceremony for the immediate past headmistress of the school, Mrs Rigg-Stewart and other staff who had attained compulsory retirement age in the school on October 23, 2021.

In her address, Mrs Rigg-Stewart thanked management, board and staff for their tremendous support during her administration which enabled the school to see a lot of achievements.

She further lauded Madam Hanson for donating the mini bus to the school saying it would go a long way to help in its preparations for the annual competition, adding, “this gesture is a morale booster for the team as it prepares for the next edition of the competition”.

Mrs Rigg-Stewart mentioned a number of projects which were executed during her tenure such as the construction of classroom blocks, dormitories and more importantly the asphalting of streets which had beautified the school.

She further expressed gratitude to the old students’ association for their continuous efforts towards the growth of the school, saying, “the regular support of the old students enabled the school to add on to its infrastructure to augment that of the government.

In a welcome address, the headmistress of the school, Ms Gold Esi Andam, lauded Mrs Rigg-Stewart for her contributions towards the progress of SWESCO, saying, “we take great inspiration from your administration and that the current leadership will continue to build on it towards the school’s growth”.