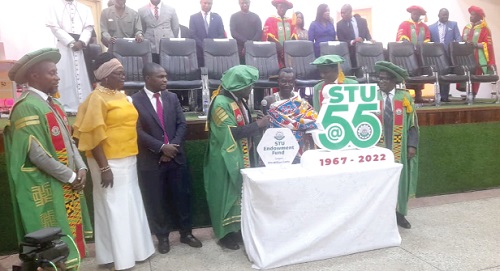 Dr Agyeman Boakye (4th from left), Chairman of the STU Governing Council, and Barima Efiritete Sampong Siaw, Mawerehene of the Dormaa Traditional Area, jointly unveiling both the 55th anniversary and the endowment fund logos during the occasion Follow @Graphicgh

While the strategic plan spells out the development of the university within a five-year period, the master plan focuses on its long-term sustainable infrastructural development.

It is expected that GH¢50 million out of the targeted endowment fund will be mobilised by the end of the year.

The launch of the fund was done as part of activities to kick-start the 55th anniversary of the establishment of the institution, which had metamorphosed from a technical institute to a fully-fledged university.

The year-long 55th anniversary of the university is being celebrated on the theme: "STU, 55 years of progress and achievement in TVET and Engineering education: Mobilising excellence for leadership in Ghana's industrialisation agenda".

Addressing the ceremony, the Vice-Chancellor of the University, Professor Kwadwo Adinkrah-Appiah, said it had become necessary for funds to be mobilised because of the weak financial base due to dwindling government funding, resulting in difficulties in the attainment of efficient operations.

He said the huge infrastructure gap in the faculties and departments had made it difficult for the university to deliver its mandate smoothly.

"The university, therefore, requires an alternative source of funding for its sustainable development," he stated.

Professor Adinkrah-Appiah announced that members of the University Council, as well as management and staff of the university, had voluntarily committed to contributing GH¢1million to support the endowment fund.

In an address read on his behalf, the Minister of Education, Dr Yaw Osei Adutwum, said for Ghana to compete in the fourth industrial revolution, science, technology, engineering and mathematics (STEM) education was not negotiable.

He explained that the government’s target was, therefore, to increase the science and humanities ratio at the tertiary level from the current 40:60 to 60:40 in favour of sciences by 2030.

For his part, the Chairman of the Governing Council of STU, Dr Kwame Agyeman Boakye, said for the past 55 years, STU had contributed immensely towards the socio-economic development of the country.

"With over 40,000 alumni, STU continues to carve a niche for itself in the training of human resources, especially in the areas of engineering, technology, technical and vocational needs of our dear country," he said.

The Bono Regional Minister, Madam Justina Owusu-Banahene, said it was the expectation of people in the region and beyond that STU would not rest on its oars but would continue to work hard to solve some of the challenges facing the country.

During the occasion, 1,779 students graduated from the university and were awarded B-Tech, HND and Diploma Certificates in Engineering, TVET, Applied Science and Technology, Applied Arts, as well as Business and Management Studies disciplines.