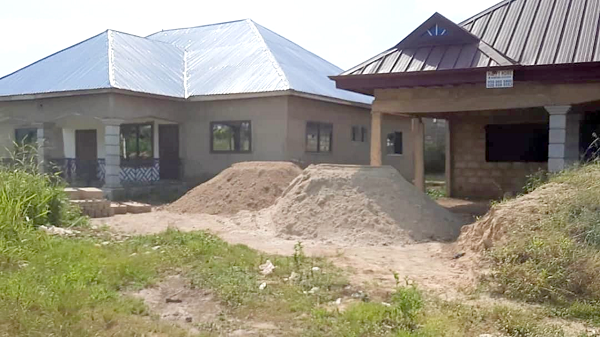 Thirty acres of land earmarked for further development of the Sunyani Technical University (STU) to turn it into a centre of academic excellence have been encroached upon.

Authorities of the university, thus, say they would be compelled to move to other areas for the development of the university’s strategic plans if nothing is done to stop the continued encroachment on its land.

The University Relations Officer (URO), Mr Dickson Kyereh-Duah, who briefed newsmen about the situation last Monday, said it was estimated that over 30 out of its 58-acre undeveloped portion of the land had been encroached on, leaving just about 28 acres for further development.

He explained that 60 out of the total 166-acre land of the university in Sunyani had already been developed by the university while the construction of 161 KVA transmission lines (pylons) across the university land by the Northern Electricity Department of the Volta River Authority had also taken over 42 acres.

Mr Kyereh-Duah stated that currently, the university had secured 55 and 42 acres at Duayaw-Nkwanta and Amasu respectively for the establishment of satellite campuses, adding that at a time that the university was looking around for more land for expansion, the little it had in Sunyani was under siege from illegal encroachers.

He, therefore, appealed to the government, traditional authorities, the media and other stakeholders to join forces with the university to stop the encroachment and protect the land of the institution for future generations.

Mr Kyereh-Duah said the management of the university would be deploying a series of coordinated activities to rid the STU land of encroachers.

“Let me also warn the developers who are raising buildings overnight with the impression that once the building is in place, they will negotiate with the university to revise their notes as there will be no room for such compromise,” he said.

A visit to a part of the encroached area revealed that a number of buildings being constructed are at various stages of completion.

Mr Kyereh-Duah explained that when the university was established as a technical institute over 50 years ago, there were less than 100 students, yet it was envisaged that the institution would grow 1,000 folds in the future, hence the allocation of the 166-acre land for future development.

“Today, the student and staff population are in excess of 7,000 with four faculties, 15 departments and offering over 50 degree, HND, diploma, certificates and professional programmes”, he said.

Mr Kyereh-Duah said with the anticipated increase of students population to 20,000 by 2030, there was the need for the protection of the university’s land while additional lands were also acquired to accommodate the expansion of faculties and the establishment of more faculties.