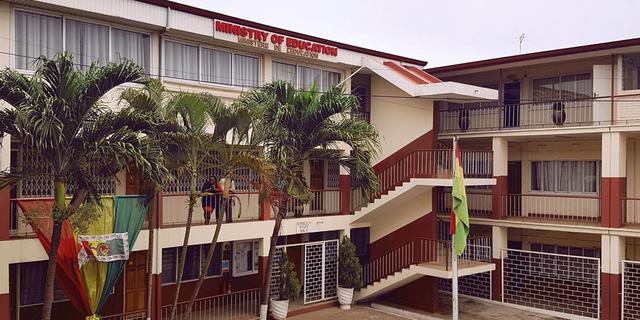 Some school heads and parents are making frantic efforts to get the authorities and members of the public to assist with food items to help feed students in public second-cycle schools.

This is because of the inadequate supply of food items to the schools Checks by the Daily Graphic in some schools in Accra, Cape Coast, Kumasi, Bolgatanga and Ho indicated that while some of the schools were satisfied with food supplies, the situation in others was dire.

Parents said the situation had resulted in poor quality of food being served students, as school heads tried to manage the situation with the few resources at their disposal.

However, the Ministry of Education said it had not received any official complaint from the schools regarding the shortage of foodstuffs, and that it would be glad if a list of the affected schools could be provided for action to be taken.

From Cape Coast, Shirley Asiedu-Addo and Edith Mensah report that some students of Mfantsipim School, St. Augustine’s College, Adisadel College and Ghana National College said they did not go to the dining because the food served was deficient in quantity and quality.

“The porridge is too light and without bread and so in the morning I don’t go to the dining hall,” a student at Mfantsipim said.

Another student said: “Sometimes the quantity is small.” The Headmaster of Mfantsipim, Rev. Ebenezer Aidoo, said the food situation was dire but management was working within its means to ensure that the students were fed.

The Headmaster of St Augustine’s, Henry Arthur-Gyan, also said the school had no option but to manage the situation.

“We know there are challenges and so we manage with what we are provided. There is not much we can do about it,” he said.

At Adisadel, a source who pleaded anonymity said supplies were not as forthcoming as they used to be.

“We are giving the students meals within what we are supplied,” it said.

“There is simply not enough food to feed the students,” he said.

“Form One students came in over two months and we struggled to feed them. It has been a struggle with the forms two and three students too, but we are trying. It is a difficult situation for management,” he bemoaned.

Mr Sarpong emphasised that while efforts had been made to get the authorities to act promptly, the school had not received a favourable reaction from the company that supplied the food items.

In an SOS audio message to parents, the Parents Association (PA) Chairman of Mfantsipim, Monister Kwarteng, said the situation in the school was not the best at all and wished that parents were in the school to see things for themselves.

“Our boys are taking koko without milk and bread,” he said, adding that “the food they are eating is too horrible”.

He said he saw the headmaster taking his personal money for the purchase of a few bottles of oil.

“Dear parents, these are our boys and as a parents association, we have less thanGH¢1,000 in our coffers. What can this do?” he quizzed.

Mr Kwarteng said the situation was extremely critical, and that those who could donate items, including bags of rice, flour and oil, should do so to help address the problem.

The Ashanti Regional Chairman of the conference of Heads of Assisted SecondarySchools (CHASS), Rev. Fr Stephen Owusu Sekyere, confirmed that most schools in the region were facing inadequate supply of food items, with the major challenge being vegetables, palm oil, sugar and flour, reports Kwadwo Baffoe Donkor.

Rev. Fr Sekyere, who is also the Headmaster of the Opoku Ware School (OWASS), said at times “students come to the dining hall with their own sugar. But we have been managing with the little we have and when it gets finished, we wait for the supplier”.

“Because I don’t want the students to demonstrate during my tenure, at times I have to dig into my pocket to buy some of the items from the open market just to ensure that the students are okay,” he said.

He said at times when the supply came, “we get about five gallons of oil, which do not last two weeks for a student population of over 3,000”.

“This is even for schools in the metropolis; you can imagine what those in the hinterlands are going through,” he added.

Gilbert Mawuli Agbey reports from Bolgatanga that school authorities in the Upper East Regional capital declined to speak to the issue of food supplies, with the reason that they did not have the capacity to speak.

The Headmistress of the Kongo SHS, Gifty Ayamba, in a telephone interview, said: “I cannot speak to you on the shortage of food; the best person to speak to on this is the district director of the Ghana Education Service.”

The Upper East Regional Minister, Stephen Yakubu, during a visit to the Bolgatanga Girls’ SHS (BOGISS) and the Bolgatanga SHS (BIG BOSS) last Wednesday to ascertain the impact of the strike by teacher unions, appealed to parents nearby to support their children with food in the wake of the strike, as school authorities fashioned out alternative ways to cook for boarding students.

From Ho, Alberto Mario Noretti writes that the General Manager of the E.P. Educational Unit, Marian Jemima Adzroe, said kitchen staff were at post in all the schools of the unit.

The Domestic Chief Bursar of Accra Academy, Leticia Boadu, said the school had not seen any shortage in food supplies.

Explaining, she said despite the rapid increase in the prices of foodstuffs, the government was regular in the allocation of funds for the feeding of students.

“The government gives us money. It normally allocates for four weeks, so we work within that period, and before it ends, another one comes.

“So in Accra Academy, we don’t have a problem. We still go according to the menu and the students are being fed well,” she said.

She further said despite the ongoing strike, the school’s kitchen staff were still committed to providing good food for the students.

“We will continue to give them food because we are parents and we can’t watch these children starve,” she added.

A number of Accra Academy students who spoke with the reporter concerning feeding said they had not seen any changes in the quality or quantity of their meals.

Responding, the Head of Public Relations at the Ministry of Education, Kwasi Kwarteng, told the Daily Graphic that so far the ministry had not received any official complaints from the schools about food shortage.

He said he would be glad if the list of schools facing the challenge was provided to the ministry for action to be taken on the matter.

When Mfantsipim School was cited as an example, he said that would be brought to the attention of the ministry for the necessary action.

To address the delay in paying suppliers, Mr Kwarteng said, the ministry was in discussions with some banks to pay them.

Asked about the issue of poor quality of food, he said that could be subjective.