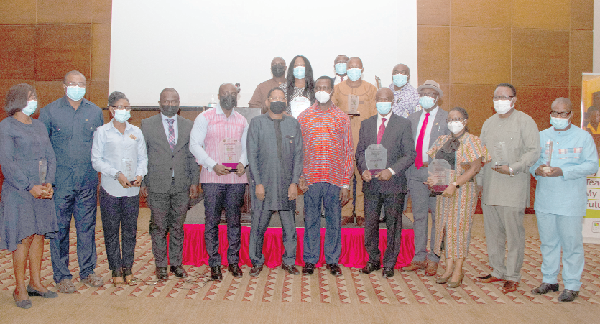 Dr Yaw Osei Adutwum (arrowed), Minister of Education, and other dignitaries with the sponsors
30.5k Shares

The Minister of Education, Dr Yaw Osei Adutwum says no country in the 21st century can transform itself without a robust educational system that focuses on its human resource development.

He said such an educational system must provide opportunities for all to improve on themselves to help in the socio-economic development of the country.

The minister was addressing sponsors of the Ghana Teacher Prize at a breakfast meeting in Accra yesterday organised by the National Teaching Council (NTC) to appreciate the sponsors for the continuous sponsorship of the programme.

Dr Adutwum said it was sad that the gross tertiary enrolment ratio of Ghana was 18 per cent, saying that it could not help move the country anywhere.

“We must move this number up and improve the quality of our tertiary education and make it relevant to the needs of the country,” he said.

Citing Vietnam as a country that was developing fast as a result of a high gross tertiary enrolment ratio, Dr Adutwum said that country produced 100,000 engineers every year and that resulted in a number of companies lining up to pitch camps there to make use of the human capacity.

“Vietnam is a developing country like us but they are moving so fast. They participate in the Programme for International Students Assessment (PISA) and are beating all the big names,” he said, adding that Ghana would be participating in the PISA next year.

He said even Ghana found itself at the bottom of the list, “we will work hard to improve because it is a demonstration of your effort.”

Dr Adutwum said it was documented that students who took part in the PISA, during their lifetime, the economy of their countries improved more than 33 times.

He said the idea was to shift away from memorisation, describing it as the lowest point of learning and that PISA assessed the children at the highest level of critical learning.

“It is documented that if your children can think critically from the basic all the way to tertiary, then you are changing your country.

“So, what we want to do under the leadership of the President is to create an education system that will then change the fortunes of the country,” the minister explained, adding that the education in the country had to change to one that could transform the country.

He expressed concern that Ghana was producing only 6,000 engineers annually and companies in the country were looking elsewhere to hire engineers because the country was not producing enough.

Dr Adutwum ,therefore, commended the sponsors for their commitment to support the Ghana Teacher Prize, urging them to double what they had been giving in spite of the impact of the COVID-19.

For his part, the Registrar of the NTC, Dr Christian Addai-Poku, in welcoming the sponsors, thanked them for their commitment to supporting the programme.

He said the meeting was to show appreciation of their commitment and to create the opportunity for the sponsors to network and interact with the minister and other stakeholders.

The Board Chairman of the NTC, Prof. Eric Nyarko Simpson, in a statement also thanked the sponsors and the minister for accepting to grace the event as his first public event since he was made the sector minister.

The Chairman of the Ghana Education Service Occupational Pension Scheme, Mr Nathaniel Otoo, who received the platinum award for being top sponsor, gave the assurance of their commitment to continue to sponsor.

The Head of Office and Representative of the UNESCO to Ghana, Mr Abdourahamane Diallo, who spoke on behalf of the donor community, underscored the important role of the teacher and pledged to collaborate with the organisers of the programme.