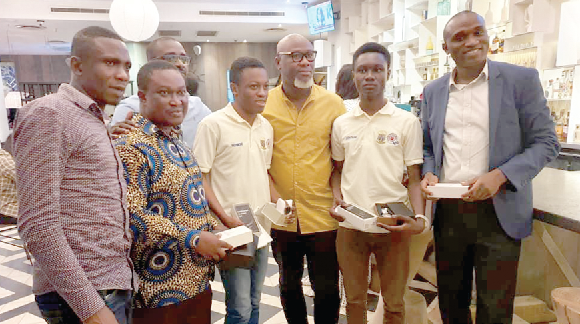 The event formed part of the company’s sponsorship package to the team for participating in the quiz and for reaching the grand finale.

A statement issued by the company in Accra said that each member of the team would this week receive an amount of GH¢1,000 for qualifying to the quarter-final stage, GH¢2,500 for the semi-final stage and GH¢5,000 for making it to the finals.

However, the contestants missed out on an extra GH¢10,000 pledge which they would have received if they had won the final, but each of them received an additional GH¢200.

The team handlers were given GH¢500 cash and a designer watch each valued at GH¢500.

Each of the three students who actually represented the team during the NSMQ also received a designer watch worth GH¢350 and a brand-new Samsung A11 phone worth GH¢850.

The Chief Executive of Movie House, Kat. David Amoo-Osae Jnr. (AM108), who is a past student of OWASS, and Vice-President of the Opoku Ware Old Boys Association (Akatakyie), assured the team of the company’s continuous support in the future.

“I wish to thank the team, handlers, school and the headmaster for the gallant and good fight even though they didn’t win the ultimate prize.

Akatakyie worldwide are very proud of your achievement so far. More effort will be put into the preparation of the team for next year’s event,” he said.

The team members were also treated to some particularly selected sumptuous three-course meal and drinks at the dinner.

A particularly touching moment was when a pregnant lady guest requested one of the contestants, Richmond Kyei Marfo (BX677), to touch her tummy because she wanted her unborn child to become academically good as he was and also to be able to attend Opoku Ware School.

The boys, who initially looked tired and nervous, eventually relaxed and took the entire lounge by storm, dishing out the unique and typical Owarean celebration dance that was joined, enjoyed and videoed by many guests at the lounge.

The Vice Secretary of the National Executive Council of Akatakyie, Katakyie Franklin Anane Gyimah (AY239), expressed great appreciation to their vice-president and CEO of Movie House for the generosity to the NSMQ team.