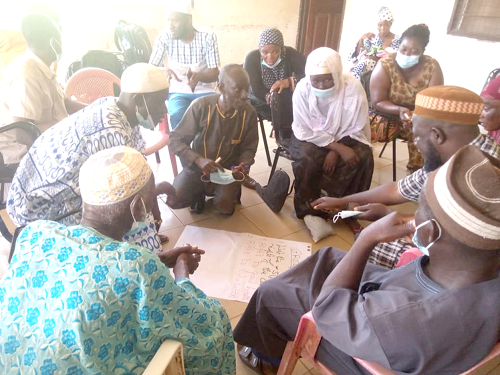 Some of the participants in a group discussion

Three hundred and sixty selected parents and teachers from three districts in the Northern Region have received training in how to improve on their performance as members of the parent-teacher association (PTA).

The training, which was organised by Right to Play, a child-centered organisation, with the support of LEGO Foundation, was aimed at helping parents and caregivers to address challenges of poor attendance of pupils, especially girls.

It was also to address the increasing number of dropouts, lack of learning materials, inadequate furniture, poor classroom conditions and lack of water in some schools.

They were also trained in how to raise funds both internally and externally to address basic challenges facing their schools without waiting on the central government.

The training forms part of the Partners in Play Project (P3) and is centered on four major areas: Duties of PTA members: Parents role in school development: Importance of School Management Committees, and the need to add play in teaching activities.

P3 is a four-year project (2020-2024) implemented by Right To Play in partnership with the Ministry of Education and its agencies across Ghana. It is being implemented in 55 districts across three regions in Ghana: Greater Accra,  Volta and Northern regions.

The project seeks to empower Ghanaian children to become creative, engaged and dedicated to life-long learning.

It also seeks to improve the quality of education for Ghanaian girls and boys aged six to 12  through playful learning.

Speaking on the sideline of the training workshop in Savulugu, the Project Officer of Right To Play Ghana, Mr Farouk Alhassan, said the training was necessitated by findings of a research organised by the organisation which revealed that some schools in Ghana, especially their partner schools, were in deplorable states and needed attention.

He noted that it would go a long way to improve on parents understanding of their roles and responsibilities as education stakeholders and enabled them to take action in solving problems faced by their schools without waiting for the central government.

"Parents are now ready to contribute money to build classrooms for their children in their communities. Some parents have now engaged local carpenters to fabricate the desks for their wards to sit on during classroom sessions and avoid sitting on the floor," he said.

For his part,  the PTA Magazia for Kpatul Zahariah  Primary and Junior High School in the Savulugu Municipality, Mrs Issah Fulera, described the training as an eye-opener as it would improve on her performance as a PTA member.