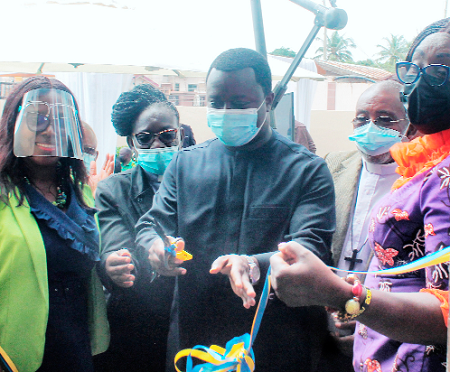 A Deputy Minister of Education, Rev. John Ntim Fordjour, has urged the public to make a conscious effort to learn and become conversant with the French language.

He said learning French especially for Ghanaians was not an issue of luxury but rather was a crucial way to tap into the numerous opportunities available in French-speaking countries.

At the launch of a bilingual school (French and English), Ecole Therese Internationale, at Otinshie –East Legon in the Adentan Municipality last Friday, Rev. Fordjour said: “With French, lawyers, teachers, engineers, architects, doctors, business men and women from Ghana can easily sell their services and goods to French–speaking countries,” he said.

Ecole Therese Internationale is an international bilingual school that uses French and English language for teaching and learning.

Students can opt to learn in French, and they will be exposed to the English language as well, or vice versa.

Ghana, Rev Fordjour said, was surrounded by French-speaking countries, and therefore, French was the key to help the country better integrate with such countries.

“The three closest neighbouring countries all speak French, and one way of deepening our cooperation and integration with them is by learning French,’ he said.

Apart from Rev. Fordjour, another Deputy Minister of Education, Ms Gifty Twum Ampofo, also attended the inauguration of the school.

In view of that, he said the government had signed a bilateral cooperation agreement with the French government for the promotion of French education.

“At the multilateral level, Ghana has deepened its commitment and as a result signed a linguistic pact with La Francophone in an effort to promote the education, learning and the speaking of French,” he said.

He said the promotion of French was also at the core of the country’s foreign policy as Ghana shared borders with French-speaking countries.

According to him, French-speaking countries had excelled in making many of their citizens conversant with the English language.

However, he said it was unfortunate that English-speaking countries had not been able to achieve such a feat by promoting French in their countries.

“The possibility of our Francophone brothers and sisters speaking and writing English is higher than  Anglophone people speaking French,” he said.

She said the country was surrounded by French-speaking countries, a situation which ignited her passion to set up the institution to educate people in French.

“Recent developments, including the African Intercontinental Free Trade Area (AfCTA), are also a factor.  This is seeking to create one African market. It is, therefore, important to educate the next generation in French to enable them to take advantage of this opportunity,” she said.