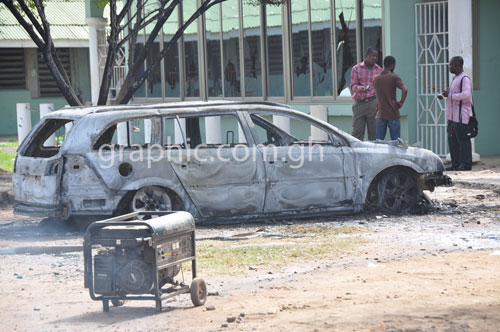 A group of final year students of the Kolege Senior High School at Dakuman-Junction in Accra beseiged the school premises last Tuesday and Wednesday, damaging portions of the school building and vandalising school property, for failure of the school’s authorities to register them to write the on-going West African Senior School Certificate Examination (WASSCE).

The students, numbering 196, also set on fire a saloon car with registration number GE 9001X, belonging to the Director, Mr Frank Ato Abraham, and broke the school’s glass windows and tore into pieces some of the textbooks.

Accompanied by some of their parents and residents of Dakuman, the students stood at the entrance of the school building, chanting war songs and threatening to destroy the house of the director if nothing was done to get them to write the on-going examination.

It took the intervention of the police to stop the students from further destruction of the school’s property and also maintain calm. The incident attracted a large crowd of on-lookers and also caused traffic on the Dakuman-Mallam Road.


Whereas some of the students were seen weeping, others hailed insults on the management of the school, especially the headmaster, Mr Albert Cornelius Frimpong, and the director.

The police had earlier sent the director to their station at Kaneshie, for his safety.

For fear of further causing harm and destruction, the police had to call for reinforcement, and lock the entrance to the school.

Some of the students who spoke to the Daily Graphic expressed fury and threatened that if nothing was done to enable them to write the examination, they would not rest until the management of the school refunded all their fees paid for their four-year stay in the school.

A 19-year old students, (name withheld) who hailed insults on the management, described them as “cheat and liars”. She said prior to the examination day, they were made to believe that no matter what happened, they would be allowed to write it.

Some of the students told the Daily Graphic that last year, a similar incident occurred but management was able to get them registered on the last day to write their exams with Accra High School.

“On Monday the director of the school told us that we will get our index numbers so we all decided to wait since our predecessors were also given their index numbers a day before their first paper. All of us waited for hours and after we realised that nothing was going to happen we went home. We came back on Tuesday only to realise that there was nobody in the school,” she said

Explaining what happened last Tuesday, the security officer at Kolege High School, Alhaji Ibrahim Busanga, said the students, holding sticks and other weapons, trooped to the school at 8 p.m. and started destroying things.

He said he could not stop them because the students were many and added that “ they were holding sharp objects which also prevented me from intervening”.

However, the director of the school has blamed  WAEC for failing to register the students because of an pending court case between the two institutions.

He said WAEC alleged that the school in 2011 registered some unqualified students which made them stop the school from further having its students sit for WAEC examination..

Mr Abraham said he was on his way to WAEC to resolve the issue when he received a  phone call that the students had set his car on fire.

The Kaneshie District Police Commander, Chief Superintendent Fleance Adika, said the car was already on fire before the police got to the school.

He said while investigation was going on, measures would be put in place to safeguard and protect the school’s property.