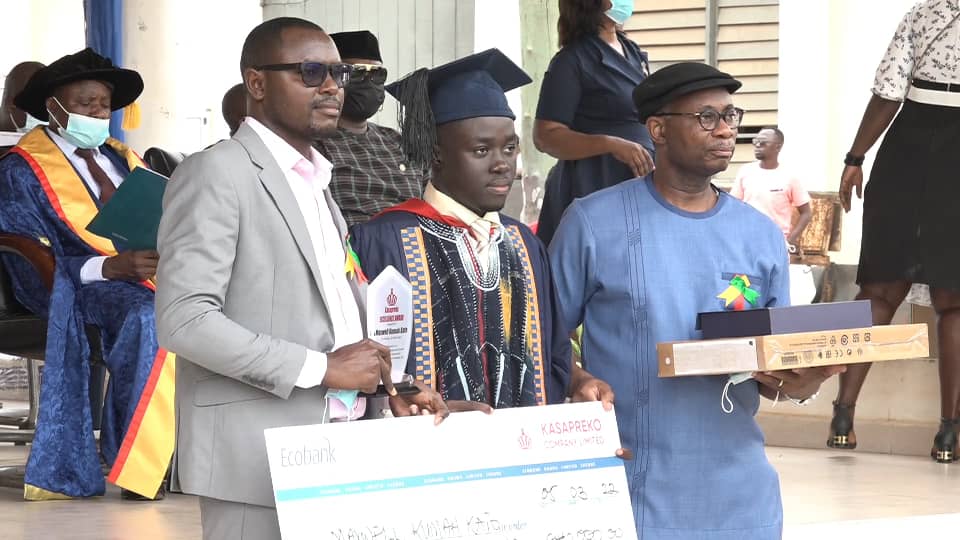 Master Kato Maxwell Kumah (middle) with officials of Kasapreko after he was presented with his award
30.5k Shares

Beverage manufacturer, Kasapreko Ghana Limited (KGL), has instituted a 'Student Leadership Awards' scheme to award brilliant students in the area of engineering and electronics at the Regional Maritime University (RMU) and the various technical universities in the country.

Known as the ‘Kasapreko Student Leadership Awards', the scheme seeks to strengthen industry and academic collaboration by offering students a practical platform through which they can apply skills acquired.

Master Kato Maxwel Kumah, the Overall Best Mechanical Engineering Student at the 18th graduation ceremony of the Cape Coast Technical University (CCTU), was the first to receive the award.

He received a GH¢2000 cash prize, a laptop, commemorative plaque, a national service enrolment with KGL as well as full employment after service.

Speaking at the graduation ceremony, the Human Resource Manager of KGL, Mr Solomon Owusu Bonnah, said the awards scheme formed part of the Corporate Social Responsibility (CSR) of the company and sought to enhance the capacity of people for national development, as well as provide social intervention policies.

He said the award scheme was also aimed at training technically gifted students who would meet the demand of the manufacturing industry.

“We are doing this to close the gap between academia and the manufacturing industry. Due to the nature of our operations and the standards required, we highly require the expertise of engineers and over the years have trained many graduates to fit into our fields of operations after school.

"Going forward, as part of our corporate social responsibility and to strategically position ourselves as employer of choice, we wish to recognize and reward Best Students in the fields of Electrical Engineering and Mechanical Engineering," he noted.

Mr Bonnah was hopeful that the awards scheme would motivate students to strive for excellence, a hallmark of KGL.

A former Dean of the School of Engineering at the CCTU, Dr Charles Emmanuel Oppong, lauded the  KGL for setting up the award scheme to train and motivate students.

He appealed to the company to award exceptional female engineering students to encourage females to venture into engineering which has largely been dominated by men.

"I want to thank Kasapreko for this laudable initiative but I will entreat them to also institute an award for the best female engineering student to encourage more women to excel in the field of engineering," he said.