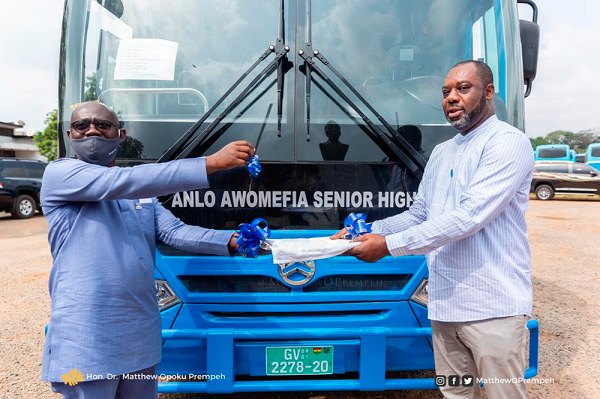 The Ministry of Education has stated that the government is committed to investing the frontline management of educational institutions in the country.

The sector minister, Dr Matthew Opoku Prempeh, stated this and explained that those frontline managers were central in any educational reform the government sought to pursue.

"We will not relent on this commitment and we will not show favour or bias to anybody. Fairness will be our watchword," Dr Prempeh said at the handing over ceremony of 120 buses in Accra to senior high schools in seven regions.

The beneficiaries are the Ashanti, Central, Eastern, western, western North, Volta and the Greater Accra regions.

Schools in the other nine regions received theirs earlier last year.

The minister explained that those schools that did receive buses in 2020 were those who benefited from such presentations in 2016.

He dispelled rumours that the government was focused on distributing the buses to only the Ashanti and Eastern regions, insisting that the distribution was not based on regions but schools.

He explained that the Ashanti and Eastern regions were worse off in the distribution of the buses in 2016, explaining for instance that 98 out of the 172 SHSs in the Ashanti Region did not receive any bus in 2016 and for that matter most of the buses would be sent to that region.

He added: “Today will not be the last time because we are still expecting some pick-ups."

He said the government was still expecting over 100 more buses and pick-ups for further distribution to schools and explained that the only criteria for a school not to receive a bus in 2020 was that the affected school benefitted from such donation in 2016, stressing that for far too long "the supposedly very good schools in the country have repeatedly been given more resources to the detriment of the less-endowed ones."

The minister further explained that the Free SHS programme was not meant to benefit only the students but it had benefited the schools as well as the teachers.

He was hopeful that henceforth when managers of schools met, the discussion would focus on how to improve learning outcomes.

"The only difference between a good school and a bad one in this country is a matter of discipline and learning outcomes," he said, adding that if managers could instill discipline in their respective schools, the students would learn and the outcome of that would be obvious.”

"We hope as heads of schools, you will be noted for the discipline and learning outcomes you achieved in your term and not, as somebody said, ‘let us go and buy konkonte.’ That is the responsibility of the Bursars," he said.

Dr Prempeh expressed gratitude to President Nana Addo Dankwa Akufo-Addo for donating the buses in furtherance of his mandate.

He commended the President for his commitment to bring less-endowed schools up.

In a statement, the Director-General of the Ghana Education Service (GES), Prof. Kwasi Opoku-Amankwa, thanked the President through the sector minister for prioritising education.