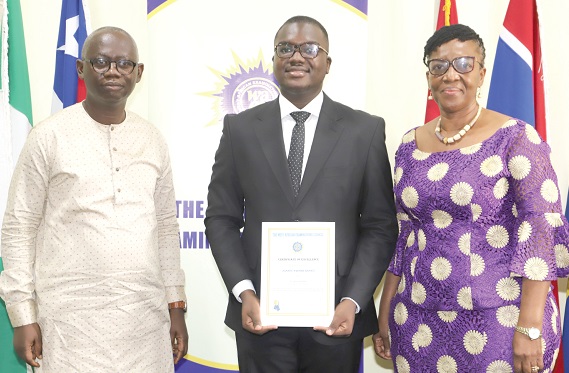 Over 2.2 million candidates from the five WAEC member countries took part in the WASSCE.

With a total T-Score of 600.9987, Mr Brako, is currently studying computer science at the Ashesi University College in Accra.

The Overall Best Student award went to Nweze Isabella Chinasa, formerly of Lagoon School, Lekki, in Nigeria with a total T-Score of 606.8766. She is currently awaiting admission to study Computer Science in a university of her choice.

Edeani Izuchukwu Godswill, who is a former student of Comprehensive School also in Nigeria, with a total T-Score of 598.1588, took third place and is studying Medicine and Surgery at the University of Nigeria.

The award ceremony was part of the 70th Annual Council Meeting of the WAEC, which took place virtually on Tuesday, March 14, 2022.

The Vice-President of the Federal Republic of Nigeria, Yemi Osinbajo, who formally opened the meeting, encouraged WAEC to reinvent its teaching and learning processes in a manner that centred on technology and innovation.

He said even though WAEC was already implementing innovations such as biometrics, verifications, online registrations, computer-based tests and digital certification in its process, it was crucial that it continually embraced technology.

Mr Osinbajo called on WAEC to begin to think along lines of shifting from offline to online exams which had immense advantages, including reducing the overall logistic cost, breaking geographic barriers, enabling a wider range of participation, providing real time analytical assessment report to students and examiners and curl the menace of examination malpractices through Artificial Intelligence (AI) based technology.

Additionally, the Vice-President said WAEC must design curricula, examinations and teaching, which thirsted for and supported creativity, imagination, deep learning and critical thinking.

“This is the Africa that WAEC must prepare our children for. An Africa that will need world-class young people who have strong interpersonal skill, entrepreneurial and creative thinking skills, among others,” he added.

In his address, the Chairman of the Council, Prof. Ato Essuman, said irregularities in public examinations had become a source of worry for stakeholders and examining bodies in the sub-region.

He said irregularities such as cheating, bribery, collusion with other candidates and supervisors, collaboration by parents and teachers, as well as obtaining information from external sources by various means, had made examination agencies appreciate how ill-equipped they were to address the issue.

He, therefore, called on stakeholders in education and member governments to address the issue.

“Examination bodies should not be left alone to define this mess. It will require collaboration with stakeholders in education and member governments to address this issue,” he said.

He, therefore, suggested that the education system should focus, among others, on moral education, love for country, integrity and service which were likely to lead to change of mindset and attitude in young people.

For her part, the Head of the National Office of WAEC Ghana, Mrs Wendy Addy-Lamptey, expressed excitement for Ghana’s feat, adding that it was not easy to always remain at the top over the years “as Ghana is”.

To her, the award was an assurance of the high validity and reliability of WAEC examinations.

She, however, said going forward, WAEC would continually reinvigorate itself to tackle the issue of test security.

“We know that we have some issues here and there with test security but we are working and putting in place things to ensure that test security is strengthened” Mrs Addy-Lamptey said.