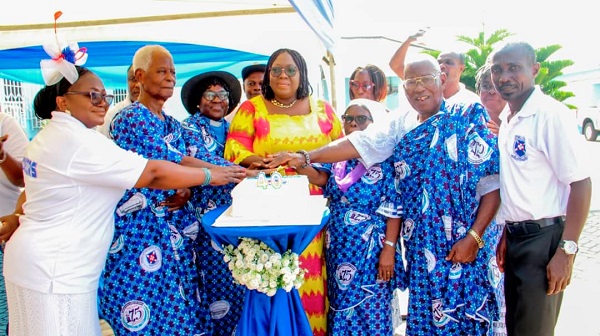 The 1986 Year group of the Teshie Presbyterian Senior High School has held a thanksgiving service to climax the 40th anniversary of the school.

The group, which is part of the Teshie Presbyterian Senior High School Old Students Association (TPSS), also held a luncheon to celebrate and reward the first Headmaster of the school, Mr Solomon Annang, some old teachers and the founding fathers of the school.

Speaking to the Daily Graphic, the President of the group, Ebenezer Adotey Adotei, said the occasion was to thank God for guiding its members in the last 40 years and also appreciate the teachers who helped shaped their lives during their stay in the school.

He said the service was also to climax the 40th anniversary of the school, which was preceded by various activities, including some presentations by the 1986 Year Group in support of the school.

"It has been 40 years since we were enrolled here as students, so we are back to say thank you to the teachers who helped shape our lives," he said.

Mr Adotei, who called on other year groups to support the school, said the pioneering group had identified some pressing needs of the school that would be addressed in due course.

The Headmistress of the school, Alice Prempeh Fordjour, who expressed appreciation for the gesture, appealed to the group and all old students to extend a hand of support.

She also urged them to liaise with the counselling department of the school to help instil discipline among the students.

"The student population is growing and we will need your support in training them to be of service to their communities and country at large," she said.
Presentations were made to Mr Annang, a Founding Father of the school, Mr Ebenezer Magnus Boye, as well as some old teachers.