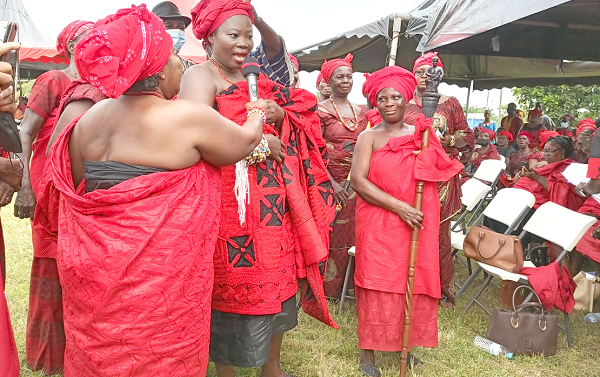 The newly enstooled Queen mother of Kpando Gadza in the Volta Region, Mama Kodzogasi II, has pledged to prioritise education as part of her long-term developmental agenda for the community.

The queen mother has targeted that under her leadership, every child in the community will be able to read and perform basic arithmetic by Primary Three and would have developed practical skills in information communication technology (ICT) before completing junior high school (JHS).

Mama Kodzogasi II, who is also the President of the Accra Supreme Lions Club, a service organisation, was outlining her developmental plans for the community in an interview with the Daily Graphic after her installation as queen mother of Kpando Gadza.

Describing education as the bedrock of development, Mama Kodzogasi gave an assurance that she would use her position to mobilise the needed resources and constantly engage relevant authorities to improve access to quality education in the area.

"Traditional rulers are supposed to be agents of development. As I take this mantle, one of the key things I would be focusing on is education.

“We need to build a very strong foundation and it is my target that by Primary Three, every pupil should be able to read and perform simple arithmetic," she said.

"We have a lot of brilliant students here and I believe that if we offered them the right push and created a favourable learning environment they would excel,” she added.

As part of its “high impact projects” for the 2021/2022 service year, the Accra Supreme Lions Club is seeking to construct an ICT centre at Kpando Gadza.

Giving an update on the project, Mama Kodzogasi said the organisation was still mobilising resources to commence the project.

She appealed to corporate organisations as well as successful citizens of Kpando Gadza in the country and abroad to support the initiative.

In a speech at her coronation, she called for unity and togetherness among the people to promote the development of the community.

"I am going to convene a meeting with all the elders to take note of all the issues affecting us and after that we are going to tackle them one after the other. I am confident that with your support and guidance, my tenure will be successful," Mama Kodzogasi II said.