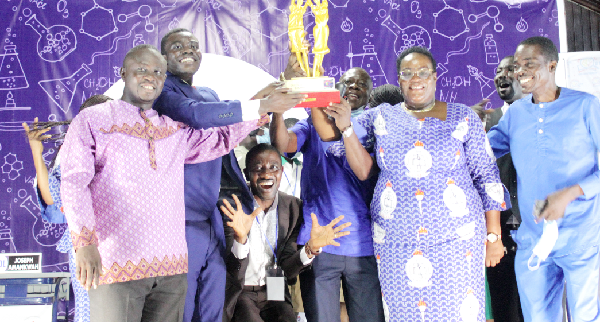 Defending Champions Good Shepherd Junior High School from the Ashanti Region emerged winners of the second edition of the quiz category of the Brain Battle Quiz National STEM Championship held over the weekend in Accra.

The winners took home a trophy, a post-secondary scholarship to study in Canada and a GH¢15,000 worth of computer lab set.

The second category, which is the science project, also saw AkatsiR/C Junior High School placing first with their project, a tarpaulin made with empty water sachets.

They went away with GH¢10,000 cash and three sets of dextechnology science set.

The competition, organised by the Cocktail Media and the National Catholic Secretariat Education Directorate, started in July last year with inter-regional competitions in the Eastern Region, with 18 Catholic schools both public and private emerging to compete for the ultimate trophy. In a speech read on her behalf, the Director of Science of the Ghana Education Service (GES), Mrs Olivia Serwaa Opare, noted that about 80 per cent of the fastest growing occupations in the world depended on Mathematics and Scientific knowledge and skills.

She revealed that over the past 10 years, growth in STEM jobs had been three times greater than that of non-STEM jobs, with workers earning higher regardless of their occupation.
“STEM knowledge extends beyond a career, it is knowledge for life,” she added.

She stated that there was the need to trigger learners interest in pursuing more STEM fields through interdisciplinary project-based learning and real-world learning through internships and mentorship.

The General Manager for Catholic Schools in the country, Ms Arabah Bentum, noted in an interview with the Daily Graphic that STEM education was now the order of the day and there was the need to encourage children to cultivate a love for STEM education.

Ms Bentum also revealed that the competition was organised to bring unity among Catholic schools in the country.