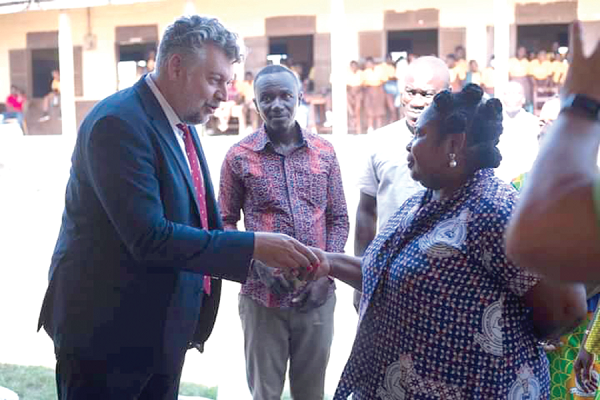 Robert Hruby handing over the keys to Miss Clara Dorothy Mensah, Headmistress of the school

A dilapidated classroom block of the Elmina MA Basic School which posed a threat to both junior high school teachers and students has been rehabilitated and handed over.

The old structure leaked badly and was a disincentive for students who did not go to school when it rained because teaching and learning were always disrupted anytime it did.

Now, students have a conducive environment to learn in, thanks to the funding of a refurbishment of the block by the Michael Kunke Foundation to the tune of GH¢138,299, in collaboration with the Czech Republic Development Cooperation, which was implemented by the Lemon Beach Hotel in Elmina.

A student of the school, Miss Janet Quegya, expressed delight in the "new" school block.

“The classrooms were in a bad shape and congested we couldn't observe the social distancing protocol.

“Anytime it rained, the roof leaked badly. There was also direct sun heating up the classrooms when it was sunny, which was uncomfortable for students and teachers. Now we are happy. The new classrooms are bigger," she said.

The Assistant Headmistress of the school, Ms Clara Catherine Yawson, also stated that hitherto, the classroom block was in a deplorable state and ventilation was poor.

The Project Manager for the Michael Kunke Foundation, Mr Eric Djantor, said the motivation for the project was primarily to give a better teaching and learning experience to both teachers and students.

He said the previous structure was not conducive for the children and teachers to stay in for learning and teaching and became a danger to the users.

"So we thought building this new one would motivate the students and the teachers to come to school to teach and learn hard to pass their examinations," he stated.

The Headmistress of the school, Ms Clara Dorothy Mensah, expressed her appreciation for the gesture and pleaded for support for an Information Communication Technology laboratory and also for the renovation of their kindergarten classrooms.

The Economic and Trade Officer at the Czech Embassy, Mr Robert Hruby, said the Czech Republic had a lot of mutual cooperation culturally and socio-politically, adding that the country, through its embassy, was working to help the local communities with projects like the school.

He underscored the importance of education and said the embassy would continue to support projects in the communities.

Mr David Ekow Duron, the Chief Executive Officer of Lemon Beach Hotel, said his organisation was a proud member of the Elmina society and economy, adding that it was important that as a business, they also gave back to the society.