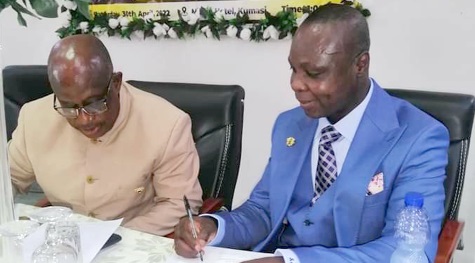 The 60th anniversary of the establishment of the Acherensua Senior High School (ACHISCO) has been launched, with a call for fair, balanced and equitable opportunities for all public schools.

A Justice of the Court of Appeal, Justice Richard Agyei-Frimpong, who made the call, said given such opportunities, all students would have the potential to develop their talents.

The launch, which was held in Kumasi, was on the theme: “Provision of quality education through discipline and hard work in the midst of COVID-19”.

A number of past students of the school, including the Minister of National Security, Albert Kan-Dapaah, attended the launch.

November 5, this year has been fixed for the grand event in Acherensua in the Ahafo Region.

Founded by the Kwame Nkrumah-led CPP government in 1960 under Ghana Education Trust, ACHISCO opened for the first time on September 22,1961 as an all-boys boarding school with an enrolment of 70 students.

In 1969, it became a mixed school with the admission of the first batch of girls.

The Sixth Form was introduced in the school in 1976 and remained so till 1990 when both the Ordinary and the Advanced Level systems phased out following the implementation of the new educational reform launched in 1987.

Justice Agyei Frimpong, who is an old student of the school, dispelled the assertion that only the “so-called big schools” could produce great men and women for the country.

He said the progress made by ACHISCO over the years gave testimony to the fact that given a fair distribution of resources and opportunities, rural schools could make it to the top.

“Today, the products of this school are at various levels of prominence, scattered over every sector of the Ghanaian society, from politics, academia, law, medicine, the security services, the clergy, chieftaincy, farming, entrepreneurship and business,” Justice Agyei-Frimpong added.

He paid tribute to the forebears whose vision, sacrifice and sense of commitment and dedication laid a solid foundation for the school, which had, over the years, lighted the path towards progress.

The Ashanti Regional Minister, Simon Osei-Mensah, commended the school for choosing discipline as the theme for the anniversary launch, saying: “As teachers, parents and school administrators, we must instil discipline in students.”

The Headmaster of the school, John Yeboah, expressed appreciation to the old students association (Akunini) for its continuous support to the school.

He mentioned Mr Kan-Dapaah as one of the notable old students who had done a lot for the school.