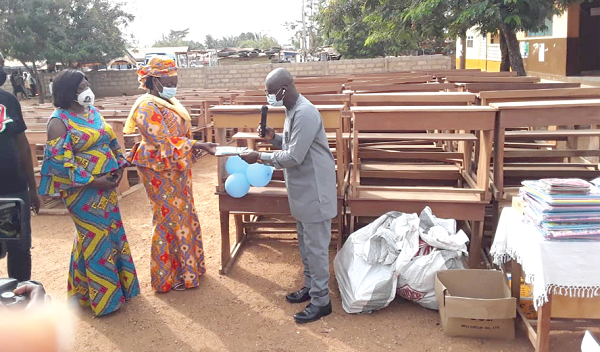 The Director-General of the Ghana Education Service (GES), Professor Kwasi Opoku-Amankwa yesterday marked his birthday with the presentation of furniture and learning materials to the Ashongman Presby Cluster of Schools in the Greater Accra Region.

The furniture included 100 mono desks and 50 dual desks, as well as learning materials for the pupils of the school.

Presenting the items, Prof. Opoku-Amankwa said furniture was a major challenge in most schools and as the government was doing its best, it was important that individuals should complement the effort of the government.

All hands on desk

He explained that the task of providing for basic schools was a huge one considering the fact that there were about 38,000 basic schools in the country, “and that is why we are saying that apart from the effort of the government, individuals and institutions can also support schools in their community.

“If we help such schools, we are doing it for the country and so, if these children grow up to be responsible citizens, it is for the betterment of us all,” the director-general said.

Prof. Opoku-Amankwa explained that the items were procured last year for distribution but it could not happen because of the outbreak of the COVID-19 and that was why it was postponed until this year.

Prof. Opoku-Amankwa said a second consignment would be delivered to the school and was hopeful that it would encourage others, especially natives of the area to support the school.

He said the other consignment would cover all the 1,868 pupils in the schools, adding that there would be two exercise books and a pen each for those in the upper primary, while a pencil and eraser each will also go to those in the lower primary and pre-school.

Receiving the items on behalf of the school, the Municipal Education Director for Ga East, Ms Faustina Alimah Braimah, thanked the director-general for the generous donation.

She said the donation would help alleviate the furniture challenges the school was facing, adding that the learning materials would also help improve the learning outcomes of the children.

Ms Braimah prayed for him and was hopeful that the good Lord would bless him to enable him give more, especially to the needy.

The Municipal Chief Executive, Madam Janet Tulasi Mensah, thanked Prof. Opoku-Amankwa, saying the furniture arrived at an opportune time when the municipality had a deficit of furniture.

“The schools are over-populated and we are overwhelmed. As we speak, we have a challenge in a about six schools with a population of over 114 pupils in a class in some schools in the municipality and so we are pleading with you to come to aid of the Ga East Municipality,” she told the director-general.

She noted that the initiative of the DG was not only at the Ga East Municipality, “you have done it across the board and it takes a kind-hearted person to do so.”