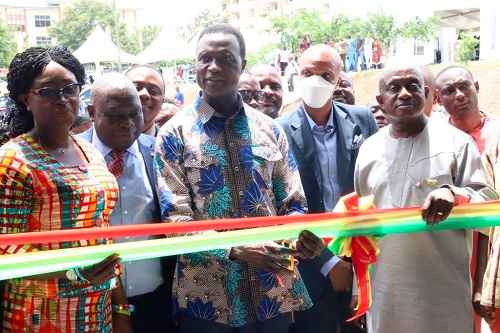 Dr Yaw Osei Adutwum (middle) cutting a tape to inaugurate an engineering workshop at Adako Jachie in the Ashanti Region. With him are Simon Osei Mensah (right), and Gifty Twum Ampofo (left), Minister of Education in-charge of TVET. Follow @Graphicgh

The government, with the support of the Chinese EXIM Bank, has constructed a modern engineering workshop for the Kumasi Technical University (KsTU).

The facility will promote the teaching and learning of technical and vocational education in the university.

It comes under the government’s programme of upgrading workshops and laboratories in technical institutions to equip them to train the needed manpower to support industrialisation.

In all, five technical universities and 10 technical institutions will benefit from engineering workshops and technical laboratories.

In addition, a technical and vocational education and training (TVET) examination centre in Kumasi will benefit from the $119-million Chinese EXIM Bank financed Ghana-China Project on the Rehabilitation and Upgrade of Technical Universities and Technical Institutes.

Speaking at the inauguration of the workshop at the Adako-Jachie campus of the KsTU, the Minister of Education, Dr Yaw Osei Adutwum, underscored the importance of TVET in job creation and as the bedrock of Ghana’s industrialisation agenda.

“TVET is a key catalyst to spur the country’s industrialisation and create decent job opportunities for the citizens of this country,” he said.

He said the government’s commitment to and investment in TVET was to equip the youth with the needed skills to make them self-reliant and redeem the misconception that TVET was inferior and patronised only by less-endowed students. 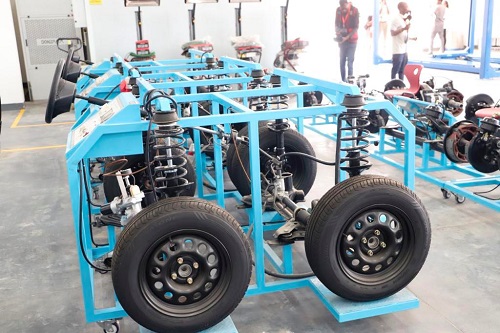 Some automative equipment in the workshop.  Picture: EMMANUEL BAAH

According to him, for sustainable development to take place, there was the need to pay significant attention to the urgent need for “us to train and make available to industry a highly skilled human resource to serve as the key drivers for the economy, notwithstanding the high cost.”

As part of measures by the government to reposition the sector to take its rightful place in the socio-economic development of the country, Dr Adutwum said it initiated certain reforms in the TVET sector and was happy that those reforms were yielding results.

The sector Minister, who represented President Nana Addo Dankwa Akufo-Addo at the event, said part of the reforms included the setting up of the Commission on TVET (CTVET), which was also inaugurated as part of the programme.

He said one of the objectives of the commission would be to ensure that there was sanity in the TVET space, and that it would be the premium agency responsible for the promotion and regulation of TVET in Ghana.

“So far, 11 of these sector skill bodies have been established and inaugurated and the constitution of the additional 11 bodies and the subsequent regulations are expected to be completed soon,” he said.

The Ashanti Regional Minister, Simon Osei Mensah, said the time had come for the narrative that TVET was the preserve of daft students to be changed.

He said one’s intelligence should not be measured by one’s ability to understand and speak the English Language, saying the machinery in the workshops could not be used by people who were not smart.

Mr Mensah said people with professional skills were those controlling the economy and called on Ghanaian youth to shun that perception and embrace TVET to acquire technical skills that would make them managers of their own destiny.