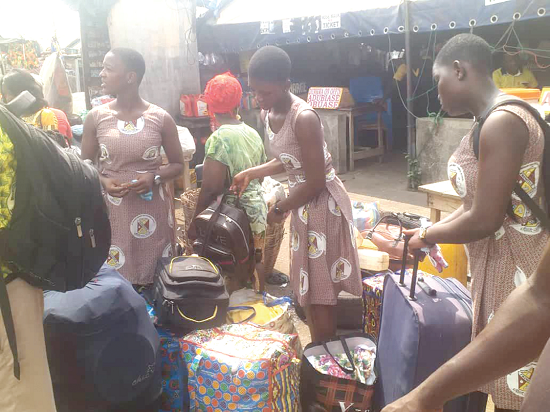 •Some students at the VIP station in Accra. Picture: Patrick Dickson Follow @Graphicgh

There was congestion at major lorry terminals in Accra last Saturday and yesterday as travellers, many of them students and their parents, desperately searched for buses to report back to school in various parts of the country.

The development followed the directive from the President for schools at all levels to reopen, after about 10 months of closure following the outbreak of the COVID-19 pandemic.

Buses were in short supply at some stations due to the huge number of passengers at those stations, many of whom became stranded.

At the main Inter-city STC Terminal at the Awudome Junction and the Kwame Nkrumah Interchange, both in Accra, as well as the VIP Bus terminal and the Neoplan Station, passengers waited in long queues to purchase tickets to travel to places such as Kumasi, Tamale, Sunyani and Cape Coast.

Some of the passengers expressed their frustration over the challenges they were facing in getting buses to their respective destinations in interviews with the Daily Graphic.

At the main STC Terminal, students, most of them in senior high schools (SHSs) and universities, said they were anxious to get back to school because classes and lectures were supposed to begin today.

“Previously, arrangements were made with the management of the STC, who allocated buses to carry students to their various schools. But this is no longer the situation; now you have to be here to hustle it out,” a UCC student who declined to mention his name claimed.

At the VIP Terminal at the Kwame Nkrumah Interchange, some of the students said they were travelling to their various schools in Kumasi.

As of about 2 p.m. yesterday, there were only five buses available.

Some of  the parents accompanying their children said they had sought permission from their employers to travel with their children.

Mrs Martha Obiah Weidum, a parent, said her son was a fresher at the Kwame Nkrumah University of Science and Technology (KNUST), and that as a mother, it was the right thing to do.

“As a parent, it is only proper to know at least where your child will be staying in school, especially when he or she is a fresher. I sought permission from my boss just to acquaint myself with the campus and the hostel he will be living in,” she added.

At the Neoplan Station, the Station Master, Mr Isaac Oppong, said since schools reopened, the station had provided enough buses to convey passengers.

“There has been no bus shortage; the only difficulty we are facing is that most passengers come without face masks, and when they are asked to buy some, they do so, but refuse to wear them,” he said.

Meanwhile, a good number of passengers were seen with their face masks on, even though most of them wore it on their chins.