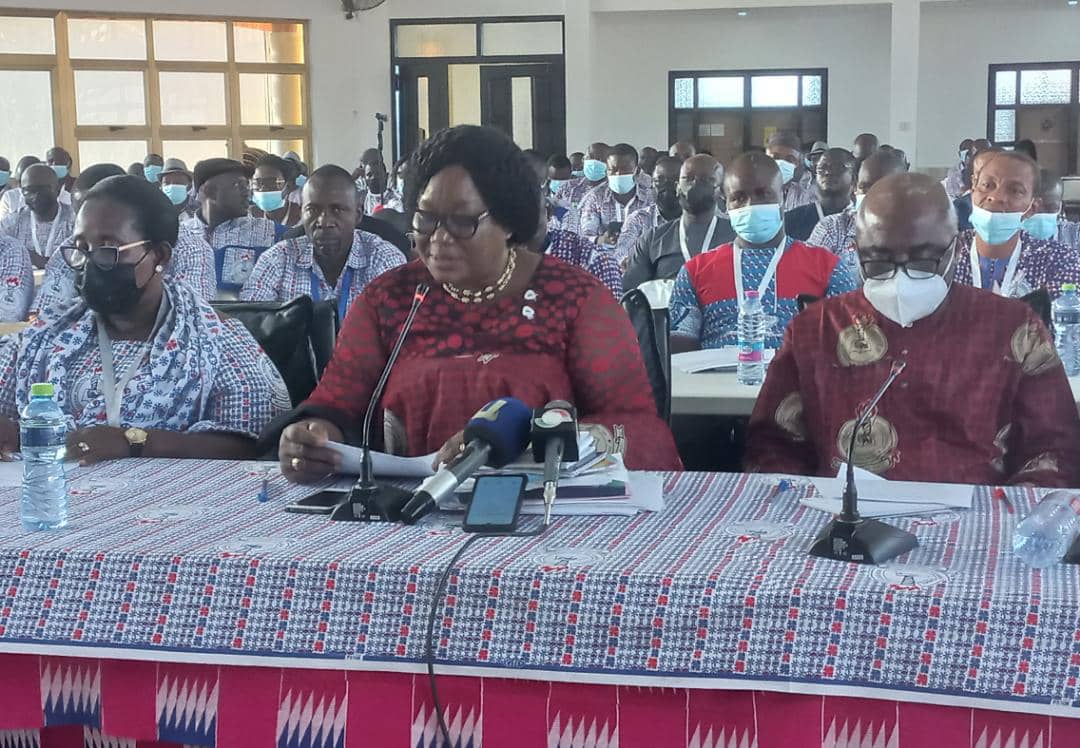 Ms Philippa Larsen (with microphone) President of the National Council of GNAT reading the communiqué.

The National Council of the Ghana National Association of Teachers (GNAT) has called on the National Teaching Council to stop compelling teachers to take part in its Continuous Professional Development programmes.

It said the continuous professional development of teachers was the responsibility of the employer and not the council and as such should stay within its mandate as an advising body to the Minister of Education on matters relating to the professional standing and licensing of teachers.

Consequently, the council endorsed the call by the leadership of GNAT on the National Teaching Council and district directors of education to “cease compelling teachers to attend the fee-paying Continuous Professional Development Programmes (CPDP) being run by its assigns forthwith.”

In a communiqué issued last Friday, November 12, 2021, and signed by its National President, Ms Philippa Larsen, at the end of its meeting held at Abankro, near Ejisu, the  National Council observed that the National Teaching Council has arrogated to itself the mandate of providing CPDP for teachers and has sublet same to private service providers and compelling teachers to attend the fee-paying programmes.

According to the National Council, the CPDP was the responsibility of the employer and thus supported the call by GNAT to the council to stay within its mandate which includes “coordinating and harmonizing the effective and efficient delivery of basic and senior high education in the country.”

In the 12-point communiqué, the National Council of GNAT also called on the ruling government to provide decent accommodation for teachers as promised in its 2016 manifesto as well as the 2017 budget of the government.

“We can longer wait for the realisation and fulfilment of this promise, which has been outstanding five solid years down the line. We are, therefore, looking forward eagerly to it, soonest, in the collective interest of both the Unions and government,” said Ms Larsen.

Still, on the welfare of its members, the National Council further called on the National Labour Commission to prevail on the employer and “all who matter to address the issues bordering on the Collective Agreement and the Conditions of Service of teachers, which in effect, affect their performance and well-being.”

Ms Larsen also expressed the National Council’s abhorrence to the unruly behaviour being demonstrated by students in some schools towards school authorities, teachers and themselves which sometimes result in needless injuries and death.

Using the recent incident which occurred at the Konongo Odumasi Secondary School (KOSS) which led to the death of one student as a reference point, Ms Larsen said the council “finds this attitude not only uncouth, but barbaric.”

The council, therefore, called on students to demonstrate some modicum of respect, moral certitude, tolerance and decorum towards school authorities, their teachers and themselves.

“They should learn to co-exist peacefully with one another and save their teachers, parents and the country in general from unnecessary consternation, fear, panic, anxiety and insecurity. They should assure society and all that they are our hope for the future,” she said and consequently called for a policy to be put in place to “curb this unruly behaviour of students.”

The National Council said it was dismayed at the failure of the  Controller and Accountant General Department (CAGD) to remit the Tier-2 contributions of its members to the Ghana Education Service Occupational Pension Scheme for the months July, August, September and October contrary to the provision of section 96(2) and 64 of the Pensions Act, 2008 Act 766.

It said the Tier-2 contributions of its members have been in arrears for four months and thus called on the National Pensions Regulatory Authority to press on the Ministry of Finance “to ensure prompt payment of member-monthly contributions and the associated three per centum (3%) penalty for July, August, September 2021 without further delay.”