The Arab Bank for Economic Development in Africa (BADEA) has granted a concessionary loan of $13.5 million to support basic education in the country.

The money is to help provide two-, three- and six-unit classroom blocks and ancillary facilities to improve basic education in 44 districts.

The objective is to increase access and the desire to learn, reduce stress of crowded classrooms, improve quality of education, bridge the gender gap in access to education and also reduce under-development.

The agreement was signed between the government and BADEA on October 18, 2019 and became effective on February 4, 2020.

The technical launch of the project was attended by regional and district directors of education, officials from the Ministry of Finance, representatives of Ghana’s development partners and a team from BADEA.

At the launch, a Deputy Minister of Education in charge of General Education, Rev. John Ntim Fordjour, urged directors of education in the beneficiary regions to take ownership of the projects by ensuring that “they are completed and operationalised”.

“That is why we have invited you to be part of the discussion to understand the scope of this project and the very role that you are expected to play. This is not going to be one of those projects in which work starts and stalls and another source of funding has to be secured to continue,” he added. 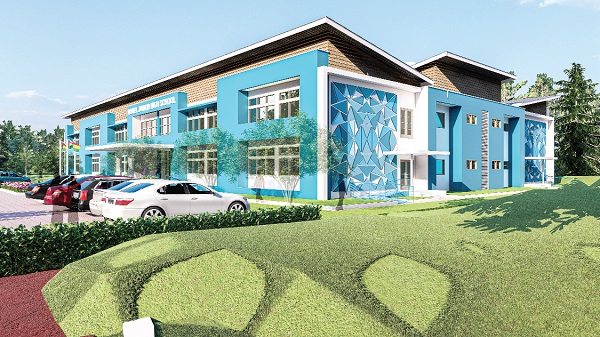 An artist’s impression of a model JHS.

The minister assured officials of BADEA that in their subsequent visits, “we will recount to you the success story of transformation and new lives that have been changed”.

According to Rev. Fordjour, the government was working towards replacing schools under trees and those with dilapidated structures in the system.

He said the government recognised the importance of quality education as a foundation for good learning outcomes.

He expressed gratitude to BADEA for the support to transform the educational sector of the country.

The Leader of the BADEA team, Mr Sameh Azzuz, explained that the intervention formed part of the bank’s social responsibility towards the promotion of quality education in the country.

He said as part of the project, the bank would also provide furniture and other teaching and learning materials for the beneficiary schools.