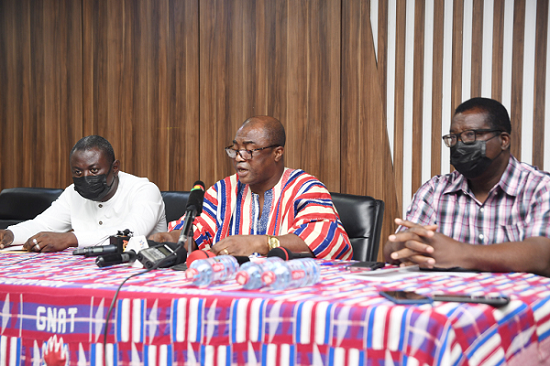 Three pre-tertiary education labour unions have given the government up to the end of September this year to address a number of issues affecting their members as well as teaching and learning in schools.

They said anything short of that would cause them to advise themselves.

They further mentioned teacher promotion, refusal to appoint teachers in offices, transfer of teachers in Special schools, signing of performance contract without the involvement of unions as other concerns.

“We the teacher unions are hereby serving notice that if by the close of September 2021 all these issues are not resolved in full by the employer, we will have no option but to advise ourselves in the best interest of our members within the framework of our collective agreement and the applicable laws of Ghana,” the General Secretary of GNAT, Mr Thomas Musah, said on behalf of the unions at a news conference in Accra on Tuesday.

Mr Musah indicated that in spite of the progress the country had made in improving access to education, there were still challenges inhibiting thousands, adding that the authorities had failed to provide teachers and pupils with modern aids to teaching and learning.

“There are no textbooks, school environment is not conducive for learning, classes are overcrowded, the payment of capitation grant and administrative resources are delayed, among others,” he said.

The poor quality of education, he said, could be seen in the results of students in first cycle schools in the country.

Mr Musah said the hours teachers were required to work per day and per week should be determined by the Ghana Education Service (GES) and the teacher unions as enjoined by the collective agreement.

Regrettably, he said, the GES had not only increased the workload of teachers, but also failed to compensate the affected teachers.

Again, he said, the slow pace of the GES system in upgrading teachers who financed themselves to acquire degrees and those who had completed their study leave with pay was worrying and demoralising.

“It is pertinent to note that even with the teachers who have been upgraded, they were not paid on the effective or substantive dates they were upgraded. The disturbing issue is that some were given three months arrears, while the majority received nothing,” he emphasised.

Moreover, Mr Musah said, there were teachers who held various positions of responsibility who were entitled to responsibility allowances, but their allowances had been stopped after they were promoted to other ranks.

“Despite several efforts by the teachers and the teacher unions, a greater number of the teachers have not had their allowances restored,” he said.

He mentioned other benefits that were yet to be honoured as car maintenance allowance, rent advance, allowance for teachers in deprived areas and additional duty allowance.

He expressed concern over the transfer of teachers in Special schools, and charged the GES to suspend the action.

He also called on the GES to suspend the signing of performance contracts with heads of institutions until it was discussed with the unions.