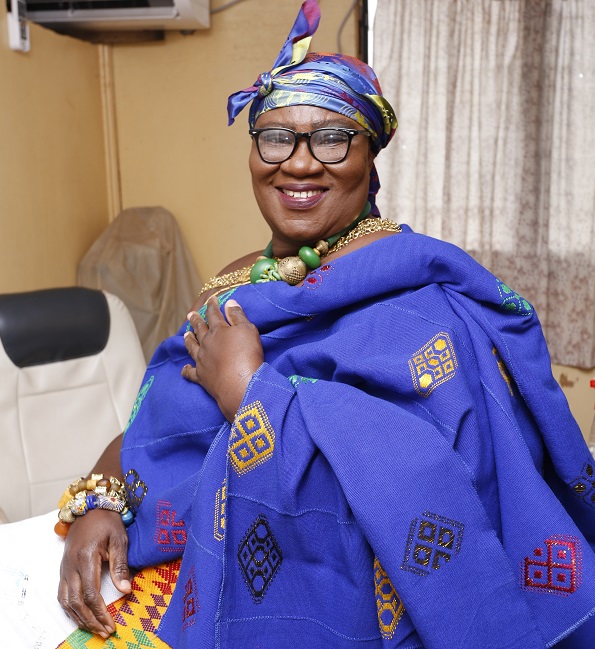 It is often said that what men can do, women can do it better. It is for this reason that in the world of chieftaincy among the Akans in Ghana some women are enstooled as chiefs. Their stools (positions) are specifically created for men to rule.

However, when a woman is known to have exhibited certain qualities that are deemed as what a man should possess, the woman is given the position of a man.

The position demands that they retain a male stool name and title. Besides, they also dress just like the male chiefs.

One of such chief occupying a male stool is Nana Barnieh Adu Ampomah, the Ankobeahene of Akyem Asuosu in the Eastern Region.

Nana Barnieh, who is known in private life as Ms Bernice Barnieh, is physically well built and known by her community to be brave, fearless, confident, resourceful, pleasant, problem solver, community builder and a leader. 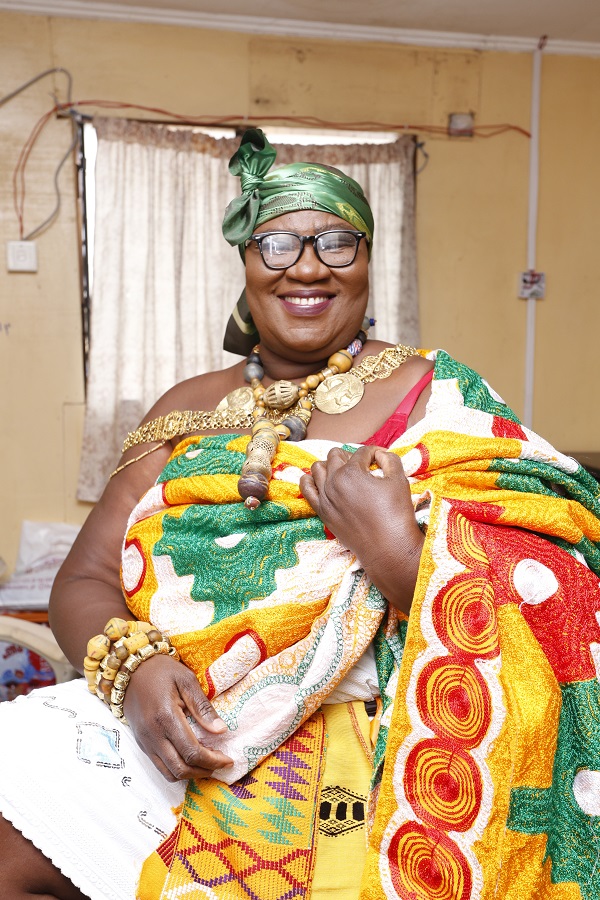 Some of these qualities are what inspired Nana Osei-Assibeye Darkwah II, the chief of Akyem Asuosu, and Nana Ofosua Dadom, the Queen mother of the area, and the elders to make Nana Barnieh a male chief.

Nana Barnieh is a woman of many parts. She is an ophthalmic nurse (specialist in eye care) by profession and the in-service training coordinator at the Madina Polyclinic Kekele in Madina, a suburb of Accra. Due to her passion for serving humanity, she is a member of the Lions Club in Ghana.

Giving the background to why she was enstooled as a male chief to The Mirror, she said she was naturally someone who loved to serve humanity so she started off by mentoring the children and the middle- aged folk in her community.

“As a trained nurse, I know the value of good grooming. Therefore, I resolved to groom the teenagers specially to learn good personal hygiene to minimise the risk of infections and also enhance their overall growth.” 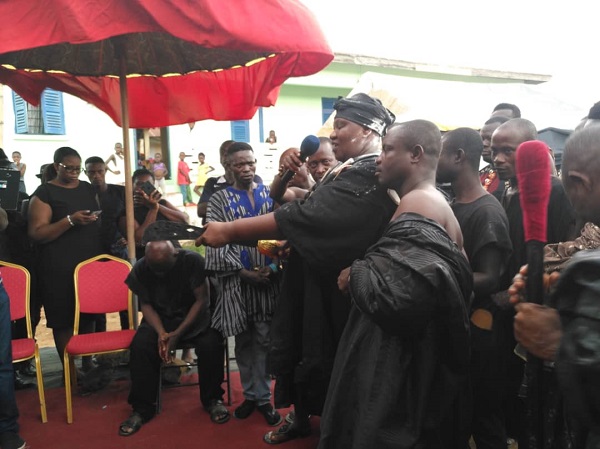 “You know in our villages some people take such things for granted. Their parents are busily farming and selling so they have little time to pay critical attention to their children’s personal hygiene such as bathing regularly, trimming of nails, monthly menstrual care, brushing of teeth to avoid tooth decay, among others,” she explained.

As part of the mentoring, she said she also trained the youth in various entrepreneurial and employable skills just to keep them away from roaming aimlessly on the streets engaging in vices.

Due to these community engagements, she was enstooled as the youth queen in 2009, with Nana Bemma as her stool name. Having played her role very well and expanded her commitments to the community, she was elevated to the status of a male chief (Ankobeahene) as result of which she had to change her previous feminine stool name to a male one, hence her new name Nana Barnieh Adu Ampomah. 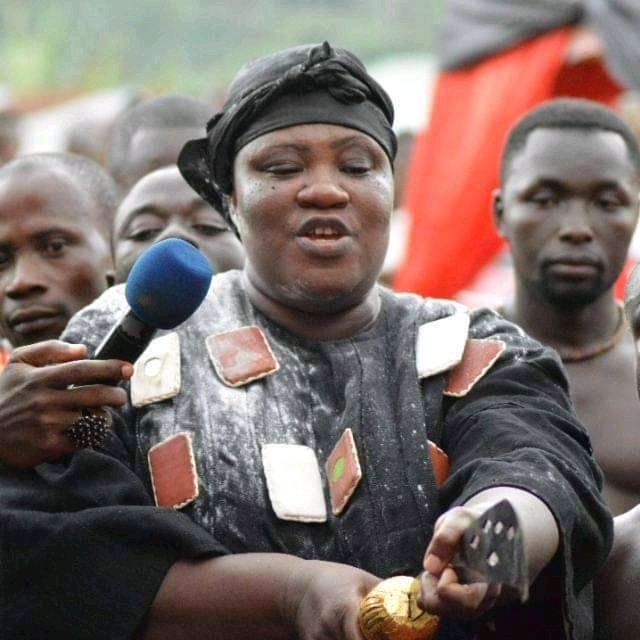 “As the male Ankobeahene, I have to dress like a male chief. What that means is that instead of the female cloth the queen mothers use, I use the male cloth. Sometimes too I wear smocks with the male shorts. However, because I have been a queen before, sometimes they are easy on me when I wear my female outfits as well,” she stated.

“If you have to take care of a palace and protect the people left behind, it means you have to be very brave, be on the alert at any time and be a risk-taker. The position allows me to also do other community engagements that would bring development to the area,” she indicated.

Morals
According to her, chiefs are always schooled to be honest in dealing with people and know how to talk to people with or without their regalia.

“From the feedback I get from people in my community, I have come to realise that many people look up to me so I always have to be upright in my dealings and also be a strong pillar for them. Sometimes people do not necessarily need money but just a shoulder to cry on,” she said. 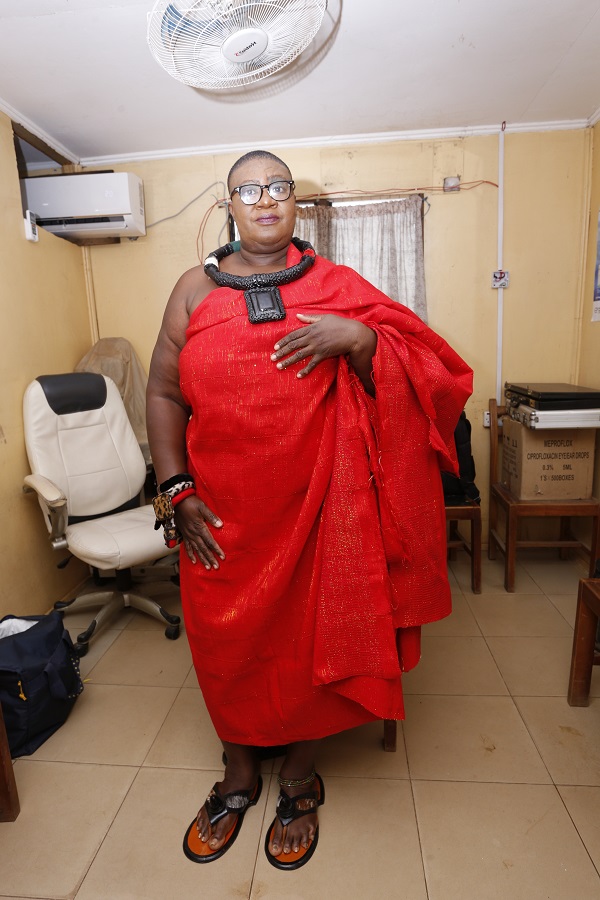 Nursing
Nana Barnieh has been practising nursing for the past 33 years. She started her career as a community health nurse and upgraded to become a registered nurse.
Nana Barnieh who likes to break new grounds decided to specialise as an ophthalmic nurse.

Asked why she decided to go into this specialised area, she explained that she had observed that the visually impaired were mostly not taken good care of in our society.

“Generally, people hardly take good care of their eyes unless they start having eye problems. I believe in preventive behaviour so I went into this field to help reduce and prevent people from going blind.”
Explaining who an ophthalmic nurse is, she said “an ophthalmic nurse is a nursing professional who focuses on assessing and treating patients with a variety of eye diseases and injuries.”

“As you know, we don’t have ophthalmologists in almost every health facility across the country, so ophthalmic nurses play a major role in the provision of services and awareness creation in the prevention of ophthalmic diseases,” she stated.

Also, as the in-service training coordinator at her health facility, she helps train student nurses who come for clinicals and also trains staff on current medical/pharmaceutical trends.

She is also a member of the disciplinary committee which ensures that nurses abide by the code and conducts of the profession.

Nana Barnieh is also a member of the Sight Team of the Lion Club in Ghana. The team is made up of various eye specialists who go to corporate institutions, schools and communities to help in screening the eye, give talks about good eye care and glaucoma.

“In the communities, for instance, we target the welders and drivers and screen them. Afterwards, we give them protective eye wear such as goggles to protect their eyes from the heat, intense ultraviolet or infrared light and flying debris during welding and cutting operations.”

Nana Barnieh was born at Akyem Oda in the Eastern Region on December 6, 1966 to the late Chief Inspector Barnieh and Madam Sarah Adu-Ampomah.

She has one sibling, (Andriana), who is a Fire Officer and three daughters. She has three grandchildren with whom she spends her free time.