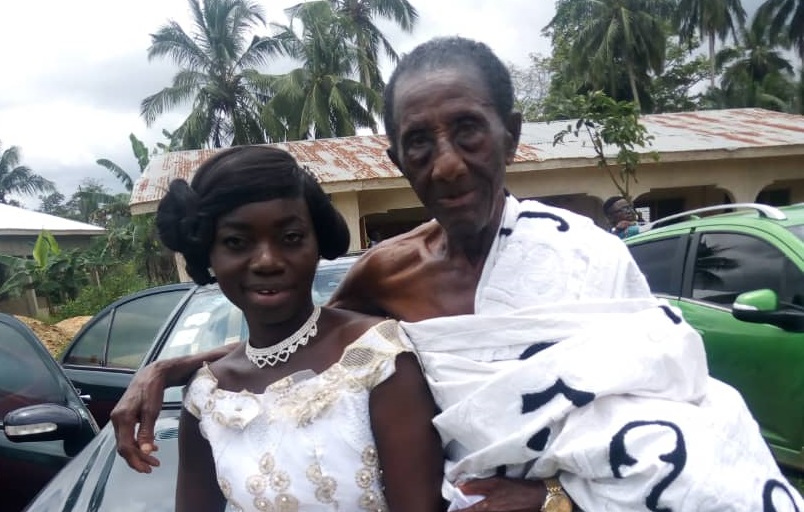 Akua Asabea, 35 and her 97-year-old husband, Akwasi Gyan a.k.a. Agyaba

Last week, a video showing a 35-year-old lady, who had just married a 97-year-old man went viral on social media.

The video has since generated mixed reactions with some saying the woman had probably agreed to marry the old man because of his money.

It has now been clarified the two have been together in the last 14-years and have four biological children.

They only recently formalised their relationship with a marriage ceremony, of which photos and videos 'flooded' social media.

The lady, Akua Asabea, at age 21 met Akwasi Gyan popularly referred to as Agyaba at a time she had freshly given birth to her first born in the year 2006. Agyaba was 83-years-old then.

Akua Asabea, who is the third wife of Agyaba, has five children, four of which are 97-year-old's biological children.

Opanyin Akwasi Gyan's explanation is that he earned the nickname Agyaba because of his humanitarian works in the area.

The couple are residents of Agya Adu Krom, a cottage located within Obuasi in Ashanti and Dunkwa-on-Offin in the Central Region area.

He owns a cocoa farm in the area and explains he has been a resident in the area since 1960.

The cottage has no electric power supply from the national grid.

In a television interview [Watch video below] with Kofi Adoma of Kofi TV on Tuesday [October 6, 2020] and monitored by Graphic Online, Asabea explained that she married Agyaba because of love and his care for humanity.

She explained that when she got pregnant with her first born, the father did not accept responsibility and so she was forced to move to Agya Adu Krom to live with her sister.

She said it was during that period in 2006 that she met Agyaba, who willingly accepted to take care of her and her son.

It was during that period that the two came together and the love and care that followed resulted in the four children, the last of which is three-years-old.

After the four children, the two agreed to formalise their relationship with a marriage ceremony and it was a video from that ceremony, which has become a social media sensation.

From the television interview with Kofi Adoma monitored by Graphic Online, it became clear that Agyaba gave birth to the three-year-old son at age 94 and when Asabea was asked if Agyaba was still active sexually, she responded in the affirmative, adding that she enjoyed making love to him.

She revealed that Agyaba has some herbs which he has nicknamed – Nnipa di nse – which makes him healthy and sexually strong.

She further disclosed that when it comes to his performance in bed, he’s very strong and good in bed.

Agyaba has other elderly children, 11 with his first wife and two with his second wife.

PHOTO: Kofi Adoma [red shirt] in a photo with Agyaba and his wife Asabea, together with their four biological children.

Agyaba interrupted Asabea's narrative during the interview and said he gives birth almost every two years.

He indicated during the interview that, he has now decided to stop giving birth.