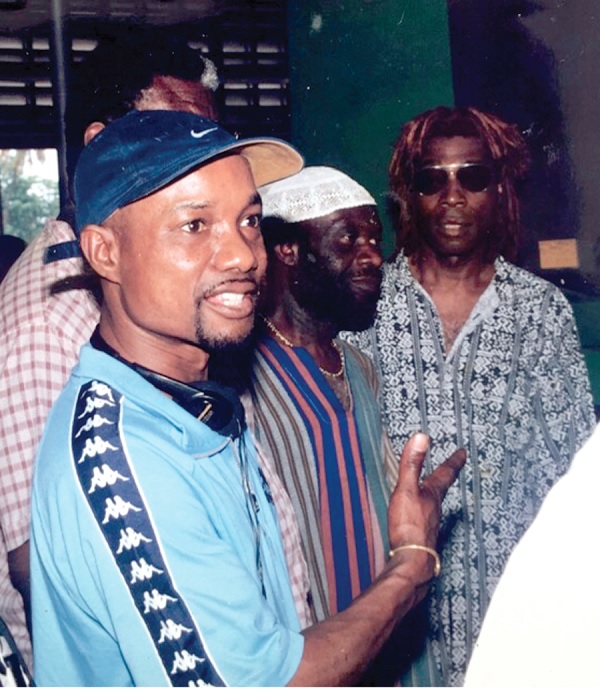 Joe Osei (in cap) with some Osibisa members, after a gig in London

Singer Joe Osei is so passionate about highlife that he thinks Ghana should not just fold her arms and whine about the genre being snatched from her hands and given crisp, new dimensions for worldwide enjoyment by Nigerian acts.

To him, there is still a long way to travel with Ghanaian highlife and it is up to our musicians to further explore the rhythms and other musical resources available here to recapture the glory that was ours sometime back.

“We set an enviable pace with highlife several years ago and infected other people, Nigerians included, with our sweet stuff. They caught the bug and created their own highlife stars,” Osei says.

“The genre now goes by a number of names, including Afrobeats, but we must not shy away from the fact that those now paid attention to in serious international music circles for the musical style initiated in Ghana are Nigerians.”

The man is back home to stay after living and working in the United Kingdom for about four decades.

Apart from his own stuff, he also performed and recorded with numerous acts including Pat Thomas, AB Crentsil, Paapa Yankson, Bessa

“I feel a fresh vim since returning to Ghana a little over a year ago. I’m more relaxed and have put together material that point to my current ideas about highlife. We can do more than we have done so far and I’m eager to get going in the studio.”

Osei is also eager to get going on the road as he landed with brand new music equipment to start a band.

His plans were curtailed by the COVID-19 pandemic but with the gradual easing of restrictions, he says it won’t be long before people hear of the Joe Osei Band in Ghana.

The man had a Joe Osei Band during his days in the UK and it was a resident group at the famous Smollenky’s On The Strand in London.

“The Ghana live music terrain is obviously not the same as the UK situation but one can be creative and move ahead from any corner in the world. What really matters is how you package your vast experience to enrich your current aspirations.”

Talking of useful past experience, Osei certainly has a lot to fall back on.

Born in Kumasi, Ashanti Region, he managed to find time during his days at St. Peter’s Primary and Wesley College Practice School, to sing soul songs for bands in the Kumasi metropolis.

He found himself in Takoradi, after basic education Kumasi, as a member of Peter Yaw Barima’s Coconut 7 band.

It was in the port city that he met singer Pat Thomas and guitarist, composer and arranger Ebo Taylor who were both then based there.

Joe Osei said it was a heaven-sent opportunity as he learnt a lot about the rudiments of music and highlife from the two giants.

Though the necessity for survival in London where he went in 1974 meant he had to work at other jobs, he still had his feet firmly planted in music and has many treasured moments.

One of them was appearing with Finley Quaye before a 100,000 crowd at Victoria Park in London.

He also remembers gigs with Osibisa in England and abroad and eventually doing the lead vocals on the famous Afro-rock band’s Munsore album.

Home sweet home, the saying goes and Osei says he is happy to be home now to add his bit to lifting highlife to the new levels to new heights.