Do most Ghanaian husbands have ‘side chicks’? 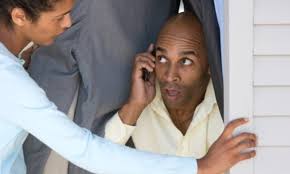 One of the greatest threats to a happy marriage is infidelity; indecent association including sex with someone other than a spouse.

Unfortunately, this canker is fast increasing and most marriages have been victims. For example, in a study done in the US some five years ago it was found out that in 80 per cent of marriages, one or both partners had cheated.

Some two years ago on one radio programme when this writer referred to the study in the US, someone called in and in a contribution asserted that the 80 per cent figure was too low and could be as high as 99 per cent in the Port City of Tema! More disturbing is the fact that

Ghanaian women who were known to be faithful to their husbands are now matching their men bumper to bumper!

An article in a Nigerian paper suggests 95 per cent of Nigerian husbands have ‘side chicks’. Today, some studies suggest 80 per cent of husbands and 65 per cent of wives in Ghana are victims of infidelity.
The problem cuts across age, profession, tribe, academic qualification and faith.

Why infidelity?
Human nature. A man is attracted to a woman and a woman attracted to a man. This does not go away because you are married. Today scientists believe there are some genes in us which predispose us to infidelity. We are naturally selfish. The heart of man is evil and wicked ( Jeremiah 17:19). We are conceived in sin and may act wrongly if we do not stand firm.

Emotional needs. Marriage revolves on needs. A man’s greatest emotional needs are respect, sex, an attractive wife and domestic care (cooking and taking care of home). For example, if a woman does not respect her man she breaks his ego. He tries to restore it by taking a woman he can control and in so doing restore his ego.

A woman’s topmost needs are affection, companionship, family commitment and financial support. For example, if a man makes no time for his wife, she feels abandoned and lonely and may have indecent relationship with even a houseboy who gives her attention and affection.

Personal benefit. In the past, couples prided in fidelity, honesty, integrity and loyalty. Today, the focus is on what we have and can do. Many cheat for personal benefits such as jobs, promotion, money and social recognition, admission to institutions and even as pay-back for spouses they see as unfaithful.

Challenge. Some spouses have the myth that it is fun and exciting to do something and not get caught. They want to break the dairy routine. Some claim ‘you can’t eat palm soup every day’ and some say ‘if you have a farm you must have a garden’. They fantasise about cheating and think it spices up marriage.

Age difference. It is best to have a spouse who is close to you in age because you will have similar interests. Big age difference causes sexual drive disparity. Women peak their sexual drive in their late 30s or early 40s. At that stage many Ghanaian men due to their poor lifestyle may have ‘light off’. Body no be fire wood and many married women are tempted to cheat. The greater the age difference the greater the chance of the younger partner to cheat.

Another psychologist puts it this way; most people cheat because they are paying more attention to what they are missing rather than what they have.

The danger with side chicks
When someone gets into infidelity, the brain stimulates the production of chemicals which puts him or her in a situation similar to the mentally challenged. His or her intelligent quotient is reduced and can’t control his or her thoughts or think right.

This may explain why some men in infidelity give unreasonable favours such as air tickets, cars and large sums to their girlfriends but not to their own wives. Many have blown out huge investment on the lottery of infidelity and spent their lives to end up in destruction. (Isiah 55;2).

The adulterous woman preys on your life (Proverbs. 6; 26)
Infidelity destroys trust, commitment and loyalty which are the foundation of a happy marriage. The partner who is cheated loses self-esteem and develops emotional pain and bitterness. He or she wonders why he or she is not adequate. The partner who cheats loses his inner strength and good character. Cheating thrills only those who cannot see the beauty in faithfulness.

Infidelity may predispose you to sexually transmitted Infections (STIs) and unplanned pregnancy. Some opt for abortion and some have ‘piki na boro’ children. Married women give pregnancy from outside to their husbands.

Infidelity negatively affects your relationship with your friends, children, work and future dreams. We hear of big politicians and senior pastors of fast growing churches crash out due to infidelity.

Infidelity is a sin. All sins are outside the body but anyone who gets into adultery sins against his or her own body. You grieve the Holy Spirit and cause Him to leave you. You open yourself for the attack of the evil one.

The Bible describes adultery in such terms as ‘introducing termites into your garden’…”an arrow being shot through your heart’’ , ”and walking barefooted on burning charcoal (Proverbs. 6:20-29). It puts you in danger of losing the kingdom of God (1 Col.6:9). In the commandments God warns us against it (EX. 20:14).

Infidelity is the most damaging thing that can destroy the sanity and sanctity of marriage because it takes enormous emotional, physical and spiritual energy from your marriage. It is what a man finds unforgivable in marriage and a scar that may never make your marriage the same again. In fact it is a deadly trap that destroys every area of your life and eats you up slowly. This means adultery has never been a solution but a big problem. Sadly, it can happen to everybody. No one is exempt.

Your only chance is to stand strong in the Lord and build a positive attitude because Jesus condemns even the adulterous desire. You may have a reason for your acts of indiscretion but you do not have an excuse for it.

If you see your spouse as God’s greatest gift to you, you will not settle for less. With commitment and prayer you can make your marriage affair-proof and enjoy the amazing