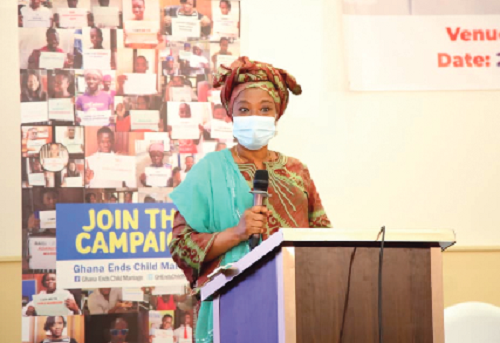 In Ghana, it is estimated that one in five girls aged 20-24 years are married before the age of 18.  The key drivers of child marriage are said to be multiple and multi-faceted and are linked to gender inequality, poverty, social norms, cultural and traditional practices, as well as teenage pregnancy.

Although child marriage is prohibited under the 1992 Constitution, which stipulates that any person under the age of 18 is a child and, therefore, cannot marry or be married off and the Children's Act of 1998 also defines a child as a human being below the age of 18, making it in compliance with the Convention on the Rights of the Child and the African Charter on the Rights and Welfare of the Child, child marriage is still rife in many parts of the country and across the world.

Poverty is also seen as another driving force of child marriage. Most parents in especially rural communities give off their teenage daughters in marriage to help provide financial stability to the family.

In 2014, the Ministry of Gender, Children and Social Protection established a Child Marriage Unit to promote and coordinate national initiatives aimed at ending child marriage in the country.

In 2016, the unit in partnership with the United Nations Children’s Fund (UNICEF) and other key stakeholders developed a National Strategic Framework on Ending Child Marriage to ensure effective, well-structured and well-guided collaboration between state and non-state institutions.

To put the country a notch higher in its attempt to halt this obnoxious act, the Domestic Violence Secretariat under the Ministry of Gender, Children and Social Protection together with the United Nations Children’s Fund (UNFPA) last Tuesday launched the Child Marriage Information Portal in Accra.

The portal is aimed at providing relevant information on the interventions by partners and also serves as a platform for increasing awareness about laws, frameworks, as well as best practices on eliminating child marriage.