Communications Minister honoured at Ghana Women of the Year Awards

The Minister for Communications and Digitalisation,Mrs Ursula Owusu-Ekuful was last weekend awarded the Excellence in Governance category for her leadership in championing gender representation in politics, education and entrepreneurship at the seventh annual Ghana Women of Year Honours.

The event, which was organised by Glitz Africa, sought to acknowledge and celebrate outstanding women making an impact in society.

The annual event also serves as a platform to encourage, mentor, support and empower the younger generation, especially women to continue to excel and strive higher towards excellence in their chosen careers.

Other honourees for the award included the Managing Director of the First Africa Group Limited, Mrs Gifty Affenyi Dadzie, who was honoured with the Lifetime Achievement Award; Prof. Naana Jane Opoku-Agyemang, former Minister for Education received Excellence Award in Education and the Head, Paediatric Oncology Unit at the Korle Bu Teaching Hospital, Dr Lorna Awo Renner was honoured with excellence in Health category. 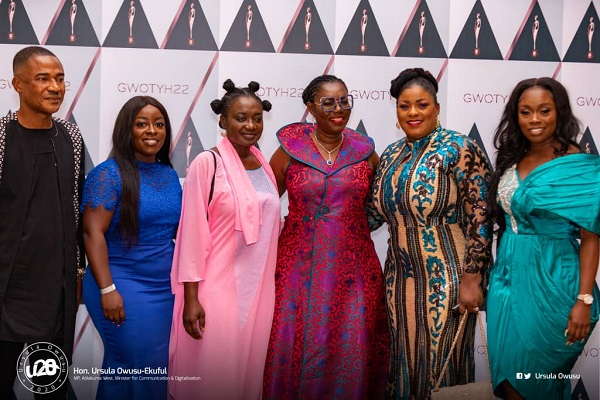 The Chief of Staff, Mrs Frema Osei-Opare, in her congratulatory message commended all the nominees for working hard to make the country a better place.

She said it was important for women to inspire and encourage one another to excel higher in their professional endeavours.

Mrs Owusu-Ekuful, in her brief remarks, expressed gratitude to the organisers for the recognition of her contributions to women and girls empowerment in the country.

She said women representation in all social spheres was important to her and that she would continue to mentor and encourage them to take all opportunities presented. She mentioned that the Girls-in-ICT programme under the ministry was one initiative that sought to provide computer literacy and digital skills for young girls so they take interests in technology and innovation, adding that she was optimistic that the training will help girls build career paths to become globally competitive.