All week round in a Musk

The dominant news in the past few days, no wonder, was about the latest business deal of Elon Musk, the CEO of Tesla.

In last week’s edition of this column l looked at Musk’s interest in buying Twitter, and how that idea or intention had created skirmishes in the market.

My concentration then was on how financial markets, and the stock market in particular, react to news that could impact the value of a traded security, using Musk’s interest in Twitter as the peg.

I wanted to portray how the dominant power of information on markets influences share value.
With the change in the story, now that the deal seems close- or has happened, I guess there are several angles to this story that need exploring!

Musk’s intention is no longer masked, as according to credible reports, the billionaire is using US$21 billion of his own money, in addition to raising over US$20 billion in debt funding from some of the world’s leading investment banks to buy Twitter at over US$40 billion.

Interestingly, the Twitter Board seems to have warmed to the deal, although past media commentaries from various sources had suggested that Twitter shareholders and the Board would unleash the “poison pill” that effectively could bring the deal to its knees.
In the financial world of mergers, takeovers or acquisitions, the poison pill is used to describe impediments created to make a hostile bid seemingly impossible.

But with Musk, it seems no poison can stop him when he sets his sights on a goal that he is committed to.
Already, he has taken positions in the automobile manufacturing industry, concentrating on electric cars, and in solar and integrated renewable energy solutions as well. His business sense, and love for sustainable initiatives is remarkable for many reasons.

Enter Twitter! Here, let me just add that the Twitter deal seems a bit off the plate for Musk but the idea underpinning the acquisition shows who this billionaire really is—committed and full of perseverance. First, according to available records, Musk in 2017 had expressed misgivings about Twitter’s business approach, especially in areas he considered inimical to free speech.

So, over the years, he seems to have grown even more troubled by some of the privacy restrictions and controls on Twitter, which he describes as anti-free speech. Musk sees free speech as the “foundation of democracy”, and therefore the Twitter community of almost 200 million users or more, should be “free” to move along the corridors in the community.

To this end, Musk wants open access to everything Twitter, including source codes and algorithms that run the platform.
Such a lofty idea indeed and begs the question: What would you do when everything about your business model is public, and seemingly creates strong competition for your company?

Well, I don’t think this is something that will bother Musk that much for now. Maybe a good area for business students to probe further!
Musk has to worry about the current and future direction of Twitter, that is, if he is able to scale all the processes necessary for the deal to be sealed. My interest, however, is on how innovation can create the right balance for organisational success.

Have you wondered why Twitter, and in this case, the shareholders – most especially those with first mover advantage—are going to enjoy a good premium on their investments? In other words, why Twitter?
Well, the success story of Twitter is largely linked to how the founders and the various management teams have succeeded in creating a strong community around its usage.

In July 2006, the world was informed about the debut of Twitter, and that started this strong community that enjoys good patronage. It is estimated that Musk himself has a good number of followers on Twitter, and market influencers have found the platform a good channel for business.
In fact, innovation is the key here. At least, someone had to sit down, look at how things could be improved using a value proposition that could find favour with intended users. It has worked. 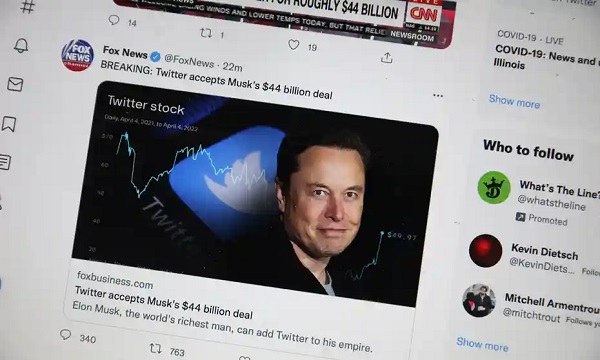 Creativity and innovation is what is going to underpin the next generation of economic activity. We already have Artificial Intelligence and Machine Learning helping to decipher and break down complex processes for industry.

Yes, it may not be all about robotics and complex algorithms with technology but the big picture is that technological innovation is affecting every industry in different ways.

This technological sea change is transforming the financial sector and the wider economy, affecting all aspects of our work – and the nature of money in a digital world. And now Musk has unmasked another element of it, by seemingly disrupting the shareholding path of Twitter.

As I have repeatedly stated in this column, we are in the age of disruption. And as Joseph Schumpeter, the Austrian-American economist, famed for his work on entrepreneurship, said: “stimulating investment and innovation” would cause “creative destruction” because there would be the need for old ideas and obsolete technologies to be discarded, and new ideas that are relevant to the needs of the time, be adopted.

A lot is happening in the world around us, as far as creativity and innovation is concerned. Amazon Go, Aldi and Tesco, for instance, are working on trials that could lead to the full launch of checkout-free stores, which would use advancements in technology to process payments via facial recognition or tracking body movements.
The Chinese market has taken payments, and for that matter the monetary system, a notch higher by introducing facial recognition software that authenticates transactions by validating facial marks.
The “Smile To Pay” technology is very popular among restaurant operators in China, and many other financial technology companies are testing a number of cashless systems.

There is, indeed, a lot happening around the globe, with exciting new developments in the fields of science and technology, that are not only transforming our lives but also are expected to shape the life of those unborn. Science has shaped our approach to dealing with the earth in its entirety, and in our understanding of our existence in a great deal.

The examples stated above are to showcase the paradigm shift in development theory, thanks to technology.
Today, least-developed and low-middle-income countries do not need to go through the same processes or follow the development pattern that the advanced countries had to endure.

No, these countries can leapfrog these processes through the right technology adoption and diffusion strategies.
People like Elon Musk demonstrate the power of focus!
This email address is being protected from spambots. You need JavaScript enabled to view it.