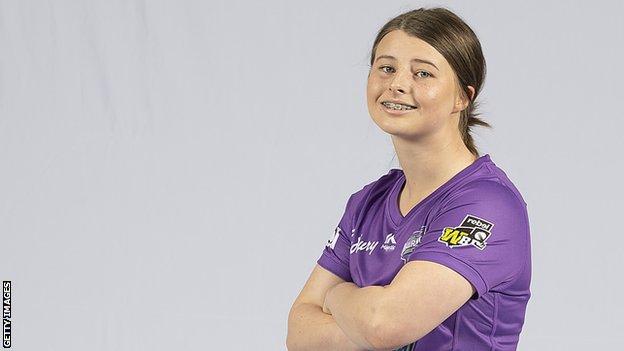 Smith is the second youngest wicket-taker in Women's Big Bash history. She made her 50-over debut aged 14, becoming the youngest player in Tasmania's history.
30.5k Shares

In a normal world Amy Smith says she would have celebrated her 16th birthday by having a low-key party with family and friends at a local pub or cafe.

"I am going to remember it for a long time," Smith told BBC Sport. "It is probably the best one yet."

It was different but there were some similarities: a cake, balloons, a rendition of Happy Birthday, a meal inside the hotel and a lie-in.

"The girls went to the beach in the morning," Smith said. "I didn't - I slept in. They were leaving at 8am. That is too early for me."

A typical teenager then? Not a chance.

Smith's call-up by the Hobart Hurricanes this year came despite her having made only two senior 50-over appearances for her state Tasmania. She has not looked back.

Her first Big Bash wicket - that of South Africa batter Lizelle Lee - made her the second youngest wicket-taker in the tournament's history at 15 years, 11 months and 18 days.

She followed that by dismissing Australia internationals Ashleigh Gardner and Erin Burns in the same over against the Sydney Sixers and a game later saw off Rachael Haynes, a player with 130 caps for Australia.

"Priesty (Hurricanes and New Zealand wicketkeeper Rachel Priest) has joked that I just get internationals out," Smith said.

"I was going into that over (against the Sixers) thinking I could get hit for a few sixes here. It was really nice to get them."
◾Listen to commentary of the WBBL semi-final between Melbourne Stars and Perth Scorchers from 08:00 GMT on Wednesday

Smith, who took up leg-spin after watching videos of Australia legend Shane Warne, bowls with an energetic bound to the crease and a fast arm.

Gardner, a key player in Australia's Twenty20 World Cup win this year, was bowled by a googly, and Hurricanes skipper Corinne Hall has said Smith has "remarkable maturity" for her age.

Smith has enjoyed several pinch-yourself moments in the tournament.

"There have been a few, especially against the Sixers with the Australia players and other internationals in that team," she said.

"When I was fielding I remember thinking 'OK, this is Ellyse Perry on strike and I am bowling to her. This is pretty cool.'"

Smith has not just been playing against world stars; she has been living with them.

The coronavirus rules for this year's tournament meant all 250 players, coaches and officials have been locked in one bio-secure hub in Sydney - the Olympic village from the 2000 Games.

Smith spends most of her time with her own team-mates - often gaming with West Indies all-rounder Hayley Matthews - but you cannot help bumping into others, as much as she may dislike the "awkward elevator chat".

"It was a bit overwhelming to start with but you make a few friends," Smith said.

"I bumped into Ellyse Perry in the gym in the second week and I was like, 'wow - that's just Ellyse Perry. She plays for Australia!'"

The bubble can be a peculiar place.

New Zealand internationals and couple Amy Satterthwaite and Lea Tahuhu have their 10-month old baby Grace living with them in the village.

Smith is the youngest of a handful of players who have schoolwork to complete in their spare time away from matches and training.

On the day of our interview Smith had already completed some maths homework. There is English, geography, history and science to do on other days.

"Compared to my team I am pretty busy," she said.

"(Team-mate) Nic Carey looked at my maths work the other day and said 'when the Xs are there I just forget about it'.

"A few are a bit younger and say 'I kind of remember' but not many can help."

The tournament reaches its climax this weekend but the Hurricanes will not be involved. They finished bottom of the table and missed out on the play-off stage.

Smith played in every match and finished with eight wickets at 28.62 - only Matthews and Carey took more.

"There were a few games I am not as happy about but you can't win all of them," she said. "I am happy I have got a few wickets and it has been coming out nicely."

If first impressions are anything to go by, Smith may have to get used to her new company.