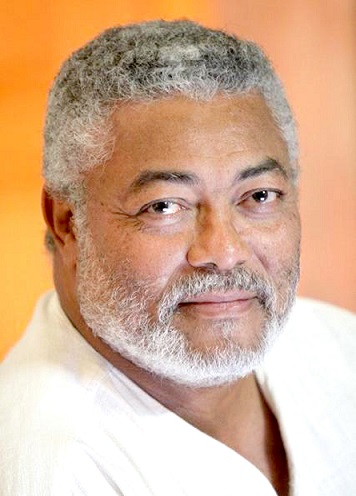 In this edition, we celebrate the life of one of our nation’s political leaders who died just last week.

The longest serving President of our country, he led this country from 1981 to 2001 and also for a brief period in 1979. A military officer, he came to power as a Flight Lieutenant of the Ghana Air Force following a coup d’etat in 1979.

He and his Armed Forces Revolutionary Council (AFRC) ruled for 112 days, during which time some former heads of state were tried and executed.

After organising a general election and handing over to the civilian government led by Dr Hilla Limann in September, our personality for this week returned to power on December 31, 1981 through another coup d’etat and ruled as Chairman of the Provisional National Defence Council (PNDC) until 1992 when he resigned from the military to contest for president on the ticket of the newly formed National Democratic Congress.

In 1992, during the first presidential elections held in the country since 1979, this personality was chosen as President. He become the first President of the Fourth Republic. He was re-elected in 1996 for four more years.

After two terms in office, the limit according to the country’s Constitution, he endorsed his vice-president, Professor John Atta Mills, as presidential candidate in 2000.

During his era as leader of the country, especially as a military ruler, our personality for this week displayed the qualities of a servant leader by holding on to the mantra of leadership by example. He rallied farmers, students, market women and people from all walks of life to participate actively in the nation-building process.

On some occasions, he led clean-up exercises aimed at ridding the country of filth by cleaning choked gutters. These things endeared him to the hearts of people.

During his time as a democratic leader in the fourth republic, the tough-talking former leader advocated the need for public office holders to live by the principles of integrity, probity and accountability.

There are some who also loathed him for the atrocities committed during his era.

This great leader we are featuring recently buried his mother, Madam Victoria Agbotui, a native of Dzelukope in the Volta Region.

He attended Achimota School before enrolling in the Ghana Armed Forces, qualifying as a pilot officer in 1969.

He was married to a presidential candidate in the 2016 general election with whom he had four  children including the current Member of Parliament for Klottey-Korle.

I guess you now know the personality the Junior  Graphic is featuring this week. What is his name?