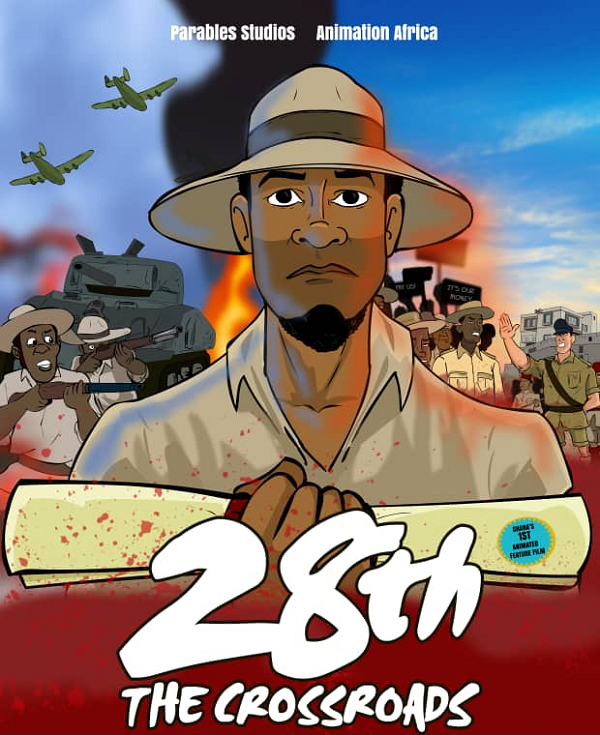 This film illustration, through the creative medium of animation, re-creates the memorable Christiansburg Crossroad shooting incident, in which, the three second world war veterans were shot in cold blood will be shown at the Silver Bird Cinemas at 7pm.

The feature film, which is mainly woven around the key architects of the Crossroads event, Seargent, Adjetey, Corporal Attipoe and Private Odartey Lamptey. These heroes had returned home after fighting for the British Empire, with dashed hopes and promises. The British, after making them lots of promises to resettle them in dignity, however failed them.

This illustrative piece, retraces their attempts at re-integrating into the society they left behind and their frustrations.

Seargent Adjetey, stands tall as that rallying figure who spear-heads the peaceful march to Osu Christiansburg Castle, to draw attention to their plight.

Unfortunately, the event turns violent, as the British Police Superintendent, Emery, after failing to convince them to retreat, fires directly at them, killing the three Heroes and leaving scores of others wounded. The sad incident left a dent on the image of the Gold Coast.

The production draws largely on references from rich archival materials at the time of the fateful incident as well as interviews.

An exciting epic of our historic legacy is recreated through the art of animation. This masterpiece which is a result of a collaboration between Parables Animation Studios and Animation Africa.

The 55 minute long creative feature was put together over a period of 37-month is expected to be premiered at the Silver Bird Cinema, at the Accra and Weija theatres.

The Premiering is a commemorative event meant to herald the 74th Anniversary of the historical Crossroad shooting Incident.

With this upcoming premier, Cycil Abban and Parables Studios, seek to deepen the use of Animation, as a creative medium to promote the development and learning of History and Civics among pupils in our schools.

This move is indeed "A Crossroad" event in the anals of Ghana's Animation Industry as the medium can be employed extensively to further promote affordable experiential learning among young learners and children.

It will no doubt go a long way to simplify abstract information and boost the retentive abilities of learners. Lead voice actor in 28th, the Crossroads is Adjetey Annan.