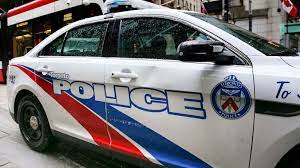 Eight teenage girls have been charged with the murder of a 59-year-old man in Toronto, Canadian police say.

The girls, aged between 13 and 16, are accused of stabbing the victim in what police describe as "a swarming" just after midnight local time on Sunday.

The man, who has not been identified, had been living in a shelter for the homeless at the time of the attack.

Toronto Mayor John Tory said he was "deeply disturbed" by the case in a statement.

The victim, who had only recently moved into sheltered housing, later died in hospital.

The girls, whose identities are protected under Canadian law, were arrested near the scene of the attack and a number of weapons were seized.

They had met via social media and three of them had had previous contact with police, Detective Sergeant Terry Browne said.

"We don't know how or why they met on that evening and why that destination was downtown Toronto."

They were believed to have been involved in an earlier altercation the same evening, he added.

A resident of a nearby homeless shelter told CBC Toronto the victim was stabbed in the stomach after trying to protect her when the girls approached her for alcohol.

"I didn't know if they had a knife or what. I was just scared," she said, explaining how she walked away from the attackers and sought refuge in the shelter.

"I am extremely troubled by the young age of those accused and by the number of people allegedly involved in this murder," Mayor Tory said.

"My thoughts are with this man's friends and all those who knew him as they mourn his loss," he added.