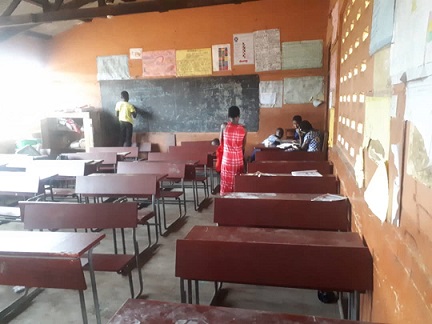 Some of the students were studying on their own. Follow @Graphicgh

Some final-year JHS students in public schools have complained that the strike action by teachers is taking a toll on their academic work.

The students, who have few months to write the Basic Education Certificate Examination (BECE), said they had difficulty studying on their own without any form of assistance from their teachers.
They made the complaints when the Junior Graphic visited some schools in Accra to find out the challenges the schoolchildren were facing after four teacher unions declared a strike action over the cost of living allowance(COLA).
Most of the classrooms were locked even though there were schoolchildren on the compound. Others were loitering or playing games while a few were studying quietly on their own.
Some lower primary pupils were alone in their classrooms without any proper supervision.

Visit to schools
Some pupils of the Kanda Cluster of Schools were seen studying under trees on their own.
Some final-year students of the Kanda AMA Basic School, Adwoa Owusu, Aisha Razak and Beatrice Amponsah expressed fear that if the strike continued for long it would affect their studies and they might perform poorly in the BECE.
“Studying on our own is very difficult. If we do not understand anything there are no teachers to help us out. We appeal to the teachers to resolve the problem quickly and return to the classroom to teach so we can perform well in the BECE”, they pleaded.
At the All Saints Anglican Basic School, Adabraka, only final-year students were in school studying in groups, however, the headmistress was around to supervise them.
A Form Three student, Aminu Ibrahim, said they found it very difficult studying on their own but when they studied in groups, they are unable to understand some topics since there was no teacher around to better explain some of the difficult concepts to them.
When asked why they continued to come to school even though teachers were on strike, a class six pupil, Godfred Joel Bayagi, said he continued to come to school because they had not officially been sent home and did not know when the strike would be called off.
He said he came to school and sought assistance from his seniors when he had difficulty in any subject.
Some of the final-year students said they were unable to study because the atmosphere was not conducive because the other students who came to school made a lot of noise making it difficult to concentrate.
At the Dzorwulu JHS, there was no student on the school compound except the headmistress, Mrs Irene Yankson Neequaye.
She said she advised the students to study on their own at home until the strike was called off.
According to her, some students used to report to school and study under her supervision when the strike began, but she later realised that after some few hours they would engage in unnecessary activities that was why she asked them to stay at home and study on their own.
At Abofu Presby School, Form Three students, Blessing Akoleila and Martha Amoah, said their biggest problem was not having any teacher around to guide them, particularly in Mathematics and Science.
“We always come to school as early as 6 am hoping to meet some of our schoolmates who are good at Mathematics and Science or teachers to guide us through complex mathematical calculations and chemical equations, but we go back home very disappointed. We hope the strike will be called off soon”, they said sadly.

Strike
Four teacher unions on Monday July 4, 2022, declared an indefinite nationwide strike over demands for the payment of the cost of living allowance (COLA).
The unions-the Ghana National Association of Teachers, the National Association of Graduate Teachers, the Teachers and Educational Workers Union, and the Coalition of Concerned Teachers Ghana, are demanding that the 20 per cent of their basic salary be paid as COLA.