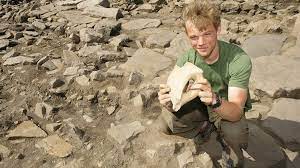 A scheme allowing budding archaeologists to dig at a renowned Roman site has opened for applications.

The Vindolanda Trust is offering 10 bursary places for people aged between 18 and 20 to join digs at the settlement near Hexham, Northumberland.

Historic England, which is providing £10,000, said Vindolanda, close to Hadrian's Wall, was the "most exciting archaeological site in Europe".

The bursaries provide a two-week placement between June and August.

Four of the places are non-residential and open to those living in the Tyne Valley while the other six will fund residential places on the dig with young people from NE1 to NE44 postcodes eligible to apply.
A spokeswoman for Historic England said places on digs at Vindolanda usually filled up fast and the "costs of taking part" could be a "barrier to some young people", adding there was "an urgent need to tackle this issue" to "address the anticipated shortage of young people going into an archaeological career in the future".

Mike Collins, Historic England's Lead on Hadrian's Wall, said he hoped to "inspire a new generation of archaeologists who might have thought this career path was out of their reach".
Marta Alberti, Deputy Director of Excavations at The Vindolanda Trust, said: "The bursary winners will not only receive expert archaeological tuition but will also have a chance to immerse themselves in a new environment and make lasting connections with excavation participants from all over the world."

A similar scheme ran in 2022 and the closing date for applications this year is 31 January.