Nuggets of the future? KFC is working with a Russian bioprinting company to 3D-print CHICKEN meat using animal cells cultivated in a lab 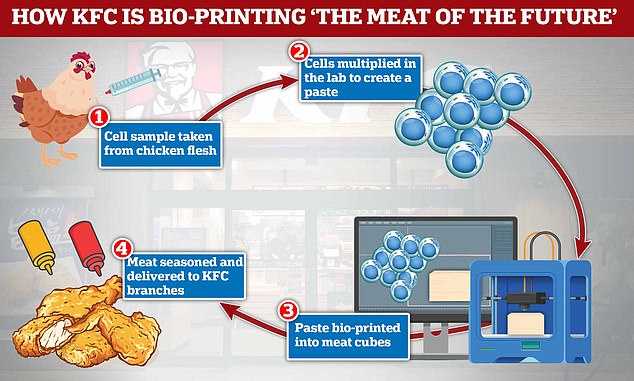 The fast food giant is working with Moscow-based company 3D Bioprinting Solutions as part of its 'meat of the future' concept.

Researchers are taking lab-cultured chicken cells from a small sample of flesh, multiplying the cells to create a paste and 3D-printing the paste into cubes to be seasoned and delivered to restaurants.

The project aims to create the world's first laboratory-produced chicken nuggets that will be 'as close as possible in taste and appearance' to the original product.

KFC said will provide its partner with all of the necessary ingredients, such as breading and spices, to achieve the signature Kentucky-fried taste.

The engineered substitute will be more environmentally friendly to produce than ordinary meat, although it won't be suitable for vegetarians or vegans.

The final product is due to be tested in the Moscow labs this autumn.

'The idea of ​​crafting the “meat of the future” arose among partners in response to the growing popularity of a healthy lifestyle and nutrition, the annual increase in demand for alternatives to traditional meat and the need to develop more environmentally friendly methods of food production,' KFC said in a statement.

'At the moment, there are no other methods available on the market that could allow the creation of such complex products from animal cells.'

The biomeat excludes various additives that are used in traditional farming methods to create a 'cleaner' final product for the consumer.

Cell-based meat products are more ethical and this particular production process does not cause any harm to animals.

KFC – which is responsible for the slaughter of around 1 billion chickens each year, according to PETA-backed campaign Kentucky Fried Cruelty – said it 'remains committed to continuous improvement in animal welfare'.

The corporation has already released a vegan burger that replaces the usual chicken breast fillet with a vegan Quorn fillet, back in January.
'At KFC, we are closely monitoring all of the latest trends and innovations and doing our best to keep up with the times by introducing advanced technologies to our restaurant networks,' said Raisa Polyakova, General Manager of KFC Russia.

'We are glad to contribute to its development and are working to make it available to thousands of people in Russia and, if possible, around the world.'

According to a study in the journal Environmental Science & Technology, the technology of growing meat from cells has minimal negative impact on the environment.

Scientists globally are working on solutions that would allow stable food provision for the growing global population while reducing the negative impact on the environment.

Gas emissions from meat production contribute to global warming through releases of methane, a greenhouse gas 20 to 30 times more potent than carbon dioxide, and other solutions are needed to meet targets to help save the planet.

Cruelty free: KFC has already brought plant-based chicken to several stores in the US.