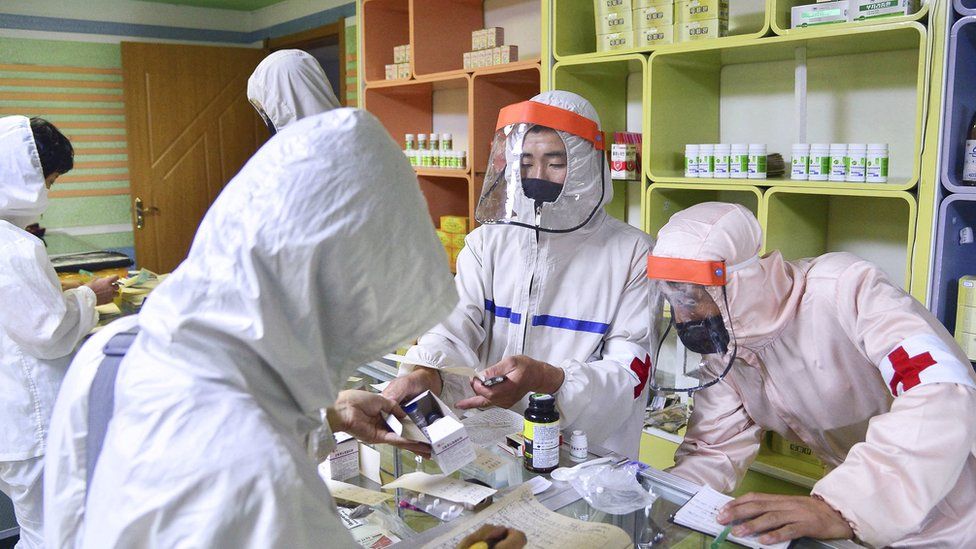 North Korea is grappling with the spread of Covid in an unvaccinated population, and without access to effective anti-viral drugs people are being advised to try alternative remedies such as drinking herbal tea and gargling salt water.

In early 2020, the country sealed its borders to try to insulate itself from the pandemic.

Its leadership has so far rejected outside medical support.

We've been monitoring state media, which is recommending various traditional treatments to deal with what is referred to as "fever".

Tea might soothe some Covid symptoms, such as a sore throat or cough, and help hydration when patients are losing more fluid than normal.

But they are not a treatment for the virus itself.

And the same relief could be found from any hot drink - though ginger and willow leaf may have some extra inflammation- and pain-reducing properties.

A "thousand of tonnes of salt" had been sent to Pyongyang to make an "antiseptic solution", the state news agency reported.

Some studies suggest gargling and nasal rinses with salt water could help combat viruses that cause the common cold. But there is little evidence they slow the spread of Covid.

Covid is mainly caught by inhaling tiny droplets in the air via the nose as well as the mouth, so gargling attacks only one point of entry.

And once the virus has entered, it replicates and spreads deep into the organs, where no amount of gargling can reach.

Painkillers and antibiotics
State television has advised patients to use painkillers such as ibuprofen as well as amoxicillin and other antibiotics.

Ibuprofen (and paracetamol) can bring down a temperature and ease symptoms such as headache or sore throat but they won't clear the virus or prevent it developing.

Antibiotics, meant for bacterial infections not viruses, are not recommended - and risks developing resistant bugs.

Laboratory research suggests some may slow the spread of some viruses, including Covid but these have not been replicated in the real world.

A study of the antibiotic azithromycin found it made little or no difference to Covid symptoms, the likelihood of hospital admission or death.

There are some approved drugs to prevent people with Covid from ending up in hospital: anti-viral drugs paxlovid, molnupiravir and remdesivir), and antibody therapies which mimic our own immune system.

However, they vary in effectiveness.

A weak health system
North Korea's health system has been set up to offer free medical care from basic services at village level up to specialised treatment in government hospitals (usually in urban centres).

But the economy has contracted in recent years because of sanctions and extreme weather such as droughts.

Closing the country's borders and strict lockdown measures will also have had a damaging impact.